Maria Konnikova is a young lib who used to be one of Charlie Rose’s army of young lib interns and associated employees. She no longer works for Rose, but was recently interviewed by Chuck while promoting her book called The Confidence Game, which studies the history of con men.

When I watched this interview, while Konnikova didn’t mention Trump by name, there was an undercurrent of wink-wink-nod-nod allusions to Trump.

Well, Konnikova finally gets around to airing what she’s surely been chomping at the bit for quite some time (“Donald Trump, Con Artist?”):

If Trump were a con artist, he would be interested in politics only as a means to some other end. He wouldn’t believe in his political opinions; instead, he would see those opinions as convenient tools for gaining what he actually desires. Insofar as he believed in any of the policies he espoused, that belief would be purely incidental. Con artists aren’t true believers; they are opportunists. Trump, as a con artist, would give up on politics the moment it stopped serving his purposes, moving on to the next thing that gave him the same level of attention and adulation. He might, for example, drift away from political life the same way he drifted away from “The Apprentice,” or from any of his business or real-estate ventures before that.

Umm… except that Trump didn’t “drift away” from The Apprentice. Once he officially entered the GOP race, he sort of bowed out, with he and NBC reaching an impasse of sorts about the show’s future. This impasse was successfully overcome, it appears, as it’s been announced that The Apprentice will continue with Arnold Schwarzenegger, taking on Trump’s previous role in the show. Ironically, Arnold was a celebrity figure which no respectable Establishment figure believed could ever be elected Governor of California, let alone twice. Hmm…

We already see some evidence of that drift in the evolution, such as it is, of his political views. Take, for example, immigration. One of the few points that he’s raised during his campaign is a promise to build a “beautiful” wall between the United States and Mexico. And yet, back in the nineteen-eighties, Trump was charged with employing illegal immigrants in the demolition of the Bonwit Teller building and the construction of Trump Tower. That disconnect seems more in keeping with an opportunistic mindset than one that is truly anti-immigrant.

Err… with respect to his stance on illegal immigration, Trump in 2016 is being judged on what Trump the businessman allegedly did 30+ years ago? And was it Trump himself who knowingly hired illegals or, as is more likely the case, was it the handiwork of subcontractors who hired illegals, as goes on today with corporately outsourced construction and landscaping projects?

With respect to his hiring of legal, imported foreign workers, Trump has never denied this. He’s been quite forthright and candid in acknowledging that, yes, he’s a businessman and, yes, as a businessman he fully exploits current laws to his advantage. I would imagine he also seeks to minimize his tax liability when he has accountants do his taxes, something I would hazard 99.9% of other Americans do.

And why isn’t Konnikova applying her own slippery criteria of ‘con man’ to, say, Hillary Clinton? Is ‘opportunistic liar’ a difference in kind from ‘con man’ or just a matter of degree? I never cease to be amazed at the selective bias, cognitively dissonant, empirical contortions liberals undertake to preserve a favored narrative/thesis.

In any event, Trump’s position on immigration is obviously the work of a flim-flam man. As Business Insider reports today:

Three years ago, Donald Trump took to Twitter to express his dismay with the national Republican Party’s self-examination.

“Does the @RNC have a death wish?” he asked…

On March 18, 2013, the RNC released the “Growth and Opportunity Project” — which many Republican leaders and members of the media took to calling the “autopsy report.” The RNC had commissioned it after GOP presidential nominee Mitt Romney flopped in the 2012 election…

Trump wrote: “@RNC report was written by the ruling class of consultants who blew the election. Short on ideas. Just giving excuses to donors.”

One recommendation of the report in particular dogs Republicans with a devastating contrast between what the party desired to become and the reality in 2016.

It appeared on the eighth page of the report. The Republican Party, it said, “must embrace and champion comprehensive-immigration reform.”…

The report warned that if the party did not back immigration reform, its appeal to minority groups would continue to shrink, particularly among Hispanic voters.

And yet, three years down the road, the only two Republican candidates with a legitimate current shot at the nomination — Trump and Sen. Ted Cruz of Texas — have only gone further than Romney in criticizing immigration-reform bills.

Trump, in particular, identified the issue long before his run, as evidenced by his 2013 social-media posting. He made illegal immigration the center of his early campaign platform and advocated, among other things, building a massive wall along the US-Mexico border and creating a “deportation force” to deport the approximately 11 million immigrants living in the country illegally.

Oh, and here is Trump in 2013 asking why we aren’t fostering more immigration from Europe rather than Mexico:

Like I said: Trump is a true flim-flam man.

“Step right up, folks, and behold the incredible miracle cure!”

Meanwhile, despite the anti-Trump spin HuffPo gives this joint YouGov/HuffPo poll on the recent Trump protest brouhaha, if you ‘read between the lines’ you’ll see a net gain for Mein Drumpf: 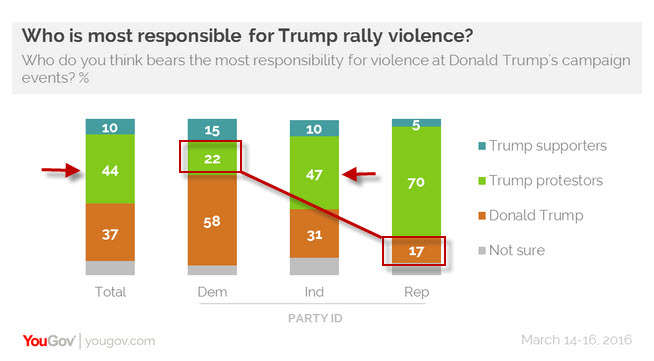 This entry was posted in MSM, Republican Party. Bookmark the permalink.