With his incredibly ill-timed “ISIS is contained” remarks, his doubling down on Syrian ‘refugees’ coming to the U.S., his response to domestic Islamic terrorism by focusing on gun control (when not lecturing to Americans about their Islamophobia), Obama’s leadership vacuum is being felt even within Democratic circles.

So, the Euro-treaty on climate change, is a great way to change the subject!

Exhibit A: this NYT story frames the climate treaty in terms of how it helps The Organizer: 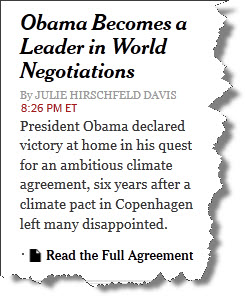