Newsweek says Kevin MacDonald’s work is ‘pseudoscience’, so I don’t need to bother reading it. Thanks Newsweek! (“The Alt-Right’s Jew-Hating Pseudoscience Is Not New”)

The piece is written by, ahem, Sander Gilman, a psychiatry professor at Emory University. 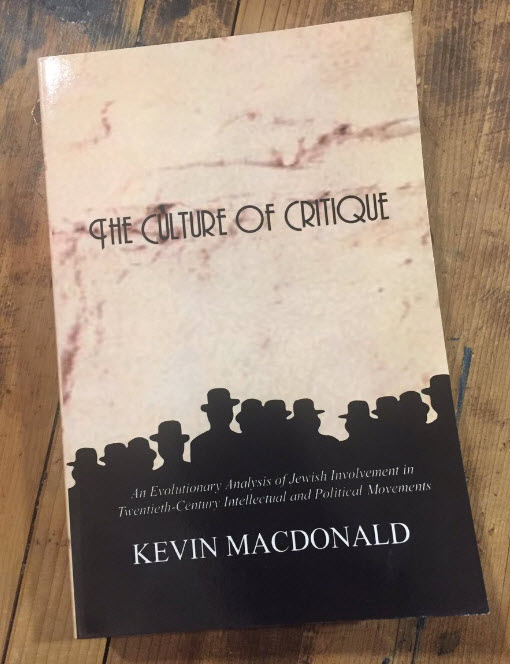 That U.S. House candidate Paul Nehlen is an anti-Semite is not surprising. That the Wisconsin Republican, trounced by House Speaker Paul Ryan in 2016, was outed by puffing the retired psychologist Kevin MacDonald’s latest bit of pseudoscience, The Culture of Critique, shouldn’t be either.

Gilman also saves Newsweek readers the trouble of laying out Kmac’s theses in an intellectually honest fashion. “There is little need to explore MacDonald’s rather dreary work,” Gilman writes. Phew! That doubly-means I don’t need to read CoC.

In 2005, Gregory Cochran, Jason Hardy and Henry Harpending—anthropologists at the University of Utah—made quite a splash with a study suggesting that superior Jewish intelligence was the inadvertent result of “inbreeding,” and was balanced by Jewish genetic diseases.

Jews as they appear in this world of pseudoscience are an invented group of ill, stupid or stupidly smart people who use science to their own nefarious ends. Other groups, too, are painted similarly in “race science,” as it used to call itself: African-Americans, the Irish, the Chinese and, well, any and all groups that you want to prove inferior to yourself.

Sadly, such pseudoscience is crude and transparent.

I don’t need to read Cochran, Hardy, and Harpending either? This is great!

You’ve saved me so much time, Newsweek, you’re the best!

This entry was posted in Jewish, Left. Bookmark the permalink.