From the London Telegraph: 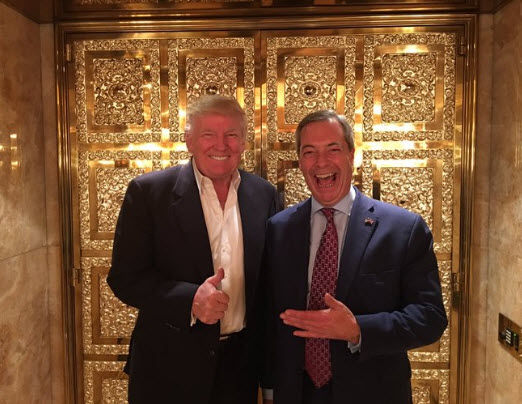 Nigel Farage will be made a “close but unofficial adviser” to Donald Trump after he enters the White House, a key ally of the new president has said.

Phil Bryant, the Governor of Mississippi, made the comments at a party thrown for Mr Farage on the top floor of the five star Hay Adams hotel overlooking the White House on Thursday night.

Nigel Farage’s love affair with Donald Trump’s America has taken another leap forward with news the former Ukip leader is to become a commentator on Fox News.

Fox announced Farage would be joining to provide political analysis on its main news channel and its business network in a short statement during Trump’s swearing-in as the 45th US president.

This entry was posted in Alt-Right, UK. Bookmark the permalink.