NYRB: Why Trump Was Inevitable

In the current NY Review of Books is a piece titled “Why Trump Was Inevitable”:

One of the main reasons many political commentators were surprised by Donald Trump’s success in the primaries was his willingness to take extreme positions and use unusually harsh rhetoric in talking about immigration and related issues. Indeed, Trump’s comments about Mexican immigrants and Muslims have been at the center of his campaign. And his pronouncements on these topics have greatly concerned many Republican leaders and elected officials who feared they would harm the party’s image and damage its electoral prospects. But how did his positions and comments play with Republican primary voters?

Trump supporters were more in favor of these proposals than supporters of other candidates, but as Figure 3 shows, large majorities of likely Republican voters who did not support Trump for the nomination did support Trump’s positions on his three central issues. Almost two thirds favored his proposal to ban Muslims from entering the US and four fifths favored building the wall and identifying and deporting illegal immigrants. In fact 60 percent of non-Trump supporters took his position on all three of his distinctive issues.

The most significant finding:

As with electability, Trump’s positions on immigration, rather than limiting his appeal, actually gave him the potential to expand his electoral coalition…

Trump’s emergence on the political scene in the summer of 2015 was unprecedented. That someone with no office-holding experience and little previous involvement in the Republican Party could emerge as the GOP nominee seemed implausible. Media commentators, pundits, and academics continued to hold this position deep into the fall and winter, even at a time when national and state polls showed Trump to be a formidable candidate if not the inevitable nominee. 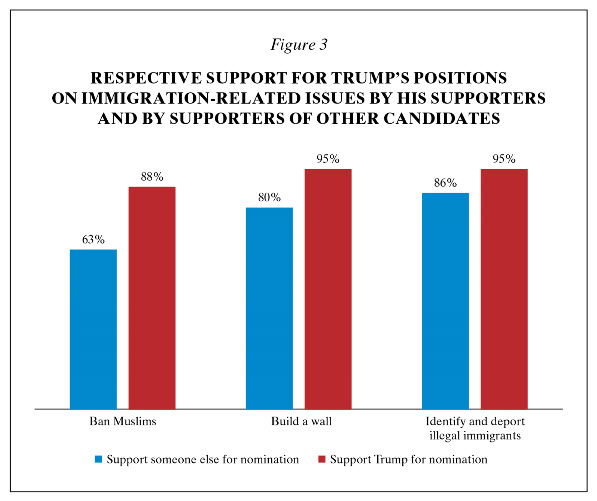