NYT: A Tale of Two Worlds 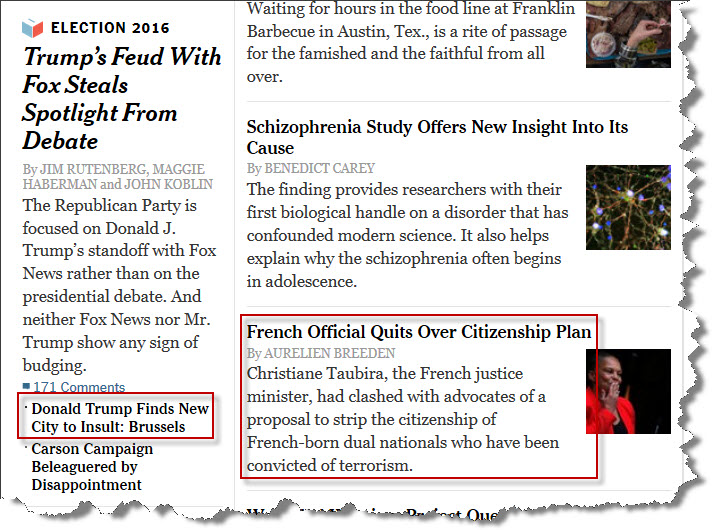 Regarding the ‘Brussels’ angle, from Bloomberg (ahem):

“You go to Brussels. I was in Brussels a long time ago — 20 years ago — so beautiful, everything’s so beautiful. It’s like living in a hellhole right now,” Trump said in the interview. The Republican presidential candidate, who has pledged to build a wall along the U.S. border with Mexico to prevent illegal entry and demanded a ban on Muslims coming into the U.S., also bemoaned the lack of assimilation in European cities…

To be sure, Trump has form on slamming Europe’s immigration policies. In October, he criticized German Chancellor Angela Merkel’s open-door commitment on CBS’s “Face the Nation.”

“Frankly, look, Europe’s going to have to handle it,” he said. “But they’re going to have riots in Germany. What’s happening in Germany, I always thought Merkel was, like, this great leader. What she’s done in Germany is insane. It’s insane.”

Trump’s comments came after it emerged that several people connected with the terrorist attacks on Paris in November lived in the Belgian capital.

This, however, is one of the best punchlines in recent memory:

Nonetheless, Brussels residents, many of whom are non-Belgians who work for EU institutions and the North Atlantic Treaty Organization, said they didn’t recognize the city Trump portrayed.

“We are not living in a #hellhole Mr. Trump, but in a hell of a place,” tweeted Belgian economist Geert Noels.

Remember, arguing that internationalism/cosmpolitanism is detrimental to a homogenous nation’s health is racist!

This entry was posted in Death of the West, Europe, Immigration, Republican Party. Bookmark the permalink.