NYT: All the News That Isn’t Fit To Print

Every ‘fake news’ (i.e., Alt Right) website is reporting on the disturbing story of the 4 blacks who bound and tortured a white man, forcing him to drink from a toilet, while they yelled ‘F*ck Donald Trump!” and “F*ck white people!”, and filming the whole thing onto FB Live.

But not the NYT. Nothing on the story… but we do have this story today, right under the online banner: 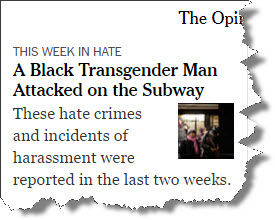 This story fits the narrative. The Chicago story doesn’t.

It doesn’t matter that the perpetrator in the attack doesn’t appear to be white, the headline alone fits the narrative.

The above story is part of a new weekly NYT series: “This Week in Hate highlights hate crimes and harassment around the country since the election of Donald Trump.”

The majority of the other cases described on the page have all the hallmarks of the Leftwing hoaxes (e.g., lots of swastikas being spray painted).

With respect to the Chicago incident, if the races were reversed do you think the NYT would report on it?

If the races were reversed, Chicago would be on fire right now.