With its connotation of those heady days in which “Nazi hunters” like Simon Wiesenthal helped capture Adolf Eichmann, the very title of “Confessions of a Digital Nazi Hunter” by Yair Rosenberg (a writer at Tablet Magazine, a Jewish identitarian publication) displays the unrivaled persecution complex of Jews and the concomitant megalomania and inflated sense of self that follows, wherein being offended is equated with being a ‘Nazi Hunter’:

Like many Jewish journalists who reported on Donald Trump’s presidential campaign, I spent the 2016 election being harassed by a motley crew of internet racists who coalesced around the future president. They sent me threats, photoshopped me into gas chambers and hurled an uncreative array of anti-Semitic slurs my way. A study by the Anti-Defamation League found that I’d received the second-most abuse of any Jewish journalist on Twitter during the campaign cycle. My parents didn’t raise me to be No. 2; fortunately, there’s always 2020.

As a result, I’ve become something of an unintentional expert on alt-right trolls and their tactics. For the most part, these characters are largely laughable — sad, angry men hiding behind images of cartoon frogs, deathly afraid that their employers will uncover their online antics. But there are also more insidious individuals, whose digital skulduggery can be more consequential than the occasional bigoted bromide.

Rosenberg then gloats about his attempts to thwart so-called ‘impersonator trolls’:

You probably haven’t heard of these trolls, but that is precisely why they are so pernicious. These bigots are not content to harass Jews and other minorities on Twitter; they seek to assume their identities and then defame them.

The con goes like this: The impersonator lifts an online photo of a Jew, Muslim, African-American or other minority — typically one with clear identifying markers, like a yarmulke-clad Hasid or a woman in hijab. Using that picture as a Twitter avatar, the bigot then adds ethnic and progressive descriptors to the bio: “Jewish,” “Zionist,” “Muslim,” “enemy of the alt-right.”

False identity forged, the trolls then insert themselves into conversations with high-profile Twitter users — conversations that are often seen by tens of thousands of followers — and proceed to say horrifically racist things.

As an example of these ‘horrifically racist things’, Rosenberg provides the following photo with the caption: “An impersonator troll offers racist responses to stories tweeted by several major publications.” 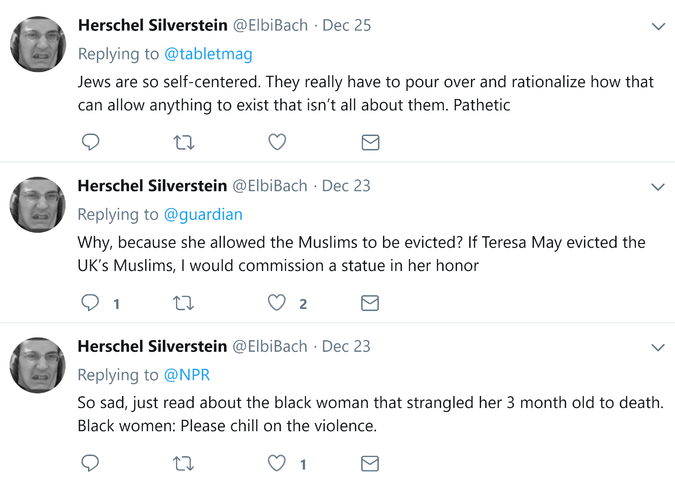 This deception is relatively simple, but it is disturbingly effective. Most casual users aren’t likely to reverse image-search a troll’s avatar to see if it was stolen from someone else or peruse the account’s other tweets and realize that it only shares racist material. Twitter lacks the cultural competency to police such impersonators, even if it were interested in doing so.

So what we have here is basically Rosenberg raging at an innovative Alt-Right means of calling attention to (and hopefully ending) the ad hominem fallacy that the Left has hoisted upon any and all (positive) discussions of white identity. As one sees in countless Hollywood movies (e.g., American History X; The Believer; etc.), rational words of white identitarianism are typically delivered through the mouths of dastardly neo-Nazi villains. The merit of an argument ought to have nothing to do with who speaks the words. Thus, if Hitler said that “2 + 2 = 4”, it doesn’t mean you’re “with Hitler” if you too believe 2 + 2 = 4.

The relative effectiveness of ‘impersonator trolls’ is a testament to how susceptible many people have become (after decades of cultural conditioning) to the ad hominem fallacy as it pertains to expressions of white identitarianism; the noticing behavioral patterns of Jews or blacks; etc. This sociological fact is itself a reflection of the historical efficacy of Frankfurt School-styled political correctness.

So I set out to unmask them.

I asked my own Twitter followers whether it might be possible to create a bot that would reply to these impostors and expose their true nature to any users they tried to fool. Neal Chandra, a talented developer in San Francisco whom I’ve never met, replied, “I can try to throw something together this evening.” And so, after a week of testing, Impostor Buster was born.

Using a crowdsourced database of impersonator accounts, carefully curated by us to avoid any false positives, the bot patrolled Twitter and interjected whenever impostors tried to insinuate themselves into a discussion. Within days, our golem for the digital age had become a runaway success, garnering thousands of followers and numerous press write-ups. Most important, we received countless thank-yous from alerted would-be victims.

The plot thickens, however, when Rosenberg’s effort runs into some problems:

Then the problems began — but not from where you might expect. The Nazis realized they couldn’t beat the bot, so they started mass-reporting it to Twitter for “harassment.” Just as they duplicitously cast themselves as minorities, they disingenuously recast our response to their ongoing abuse as harassment.

In April, the service suspended Impostor Buster without explanation and reinstated it only after being contacted by the ADL’s cyber-hate team.

Phew! Thank G-d the mighty ADL (the most professional and well-funded channelers of Jewish paranoia) swooped in with helicopters and dispensed their Special Forces-like ‘Cyber Hate Team’ to save the day.

Over the next few months, we fine-tuned the bot to reduce its tweets and avoid tripping any of Twitter’s alarms. As the trolls continued to report the bot to no avail, we thought the problem was resolved. But we were wrong.

This month, Twitter suspended the bot again, and this time refused to revive it. The company’s justifications were both entirely accurate and utterly absurd. “A large number of people have blocked you in response to high volumes of untargeted, unsolicited, or duplicative content or engagements from your account,” we were informed. This was true; Impostor Buster had been blocked by many neo-Nazis. “A large number of spam complaints have been filed against you.” Yes, by neo-Nazis. “You send large numbers of unsolicited replies or mentions.” Yes, to neo-Nazis.

Everyone’s a “Nazi” with these people.

The real threat, apparently, was not these trolls — who today continue to roam the platform unchallenged — but our effort to combat them.

More persecution complex from the Kings of Victimhood.

We used Twitter’s tools to police itself — until Twitter fired the sheriff.

More messianism and inflated sense of self.

This entry was posted in Jewish, NYT. Bookmark the permalink.