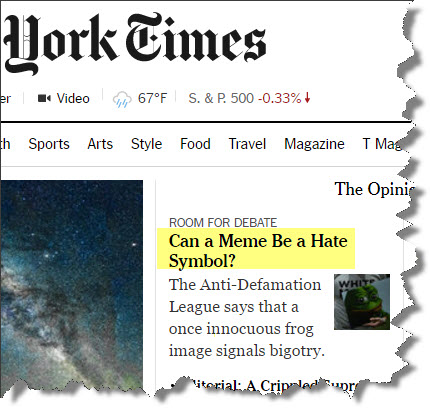 The world is on fire, but the NYT is on the case… doing stories on Pepe the Frog. “Can a Meme Be a Hate Symbol?” is a 5-person debate… yes five… on the crucial election issue of whether a cartoon frog is racist.

From one party in the debate:

Created by the cartoonist Matt Furie in 2005, the crudely drawn frog now known as Pepe spread on the internet messageboard 4chan as a quick visual stand-in for common emotional states (like when something “feels good man”). Pepe’s popularity (even over-popularity) came from the myriad iterations of his various facial expressions and catch phrases that were woven into online conversation and play.

Pepe has only recently been harnessed by the alt-right as a symbol for white supremacy, and more broadly to express support for the group’s “God Emperor,” Donald Trump. It is highly likely that this appropriation was meant as a joke, one intended to goad mainstream journalists and politicians into, first, panicking over a cartoon frog and, second, providing the alt-right a broader platform — an objective, if that was indeed the objective, that proved highly successful. Even Hillary Clinton’s campaign posted a Pepe alt-right explainer last month…

They are correct here:

Every journalist and average citizen who amplified this latest iteration of Pepe — even if the meme was shared to express confusion or even dismay that other journalists and other citizens (and certainly Hillary Clinton) had fallen into the alt-right’s trap — strengthened the connection between Pepe and bigotry.

The brilliance of the Pepe meme campaign has been to demonstrate, in real time and in the clearest of terms, how insane P.C. can be, how easily goaded P.C. media and ‘anti-hate’ groups can be.

In that sense, the Pepe meme campaign has been an effective piece of agitprop.

Andrew B would be proud.

This entry was posted in Alt-Right, Culture, MSM, NYT. Bookmark the permalink.