NYT: “Immigrants Shouldn’t Have to Be ‘Talented’ to Be Welcome” 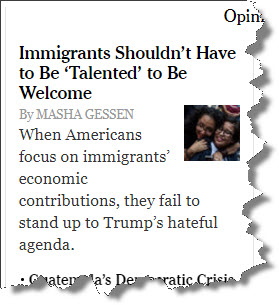 So, now it’s come to this: the Left is now pivoting to eliminate any semblance of a criterion for immigration be that immigrants themselves be a positive asset to the U.S. economy (a criterion that, from a completely different perspective, is a canard in the first place.)

Masha Gessen (ahem), who has the requisite vibrant diversity and sufficient ‘Otherness’, lectures us with a NYT op-ed titled “Immigrants Shouldn’t Have to Be ‘Talented’ to Be Welcome”:

As protests broke out across the United States in response to Mr. Trump’s [DACA] move, reporters and immigrant advocates stressed that the administration’s actions will hurt achievers — people who have graduated from college, people who have bought houses, people who work for high-tech companies.

There is nothing wrong with this story. It’s one that most, if not all, immigrants like to tell about themselves — even if their actual story doesn’t neatly fit the narrative…

In a case study of the Left’s recent penchant for cannibalization predicated on virtue-signaling-moral-purification, Gessen is brazen enough (and why shouldn’t he be, his only moral failing being that he’s not an illegal ‘Dreamer’ himself) to lecture the very hand that feeds him — the NYT Editorial board — for their racism and inhumanity:

When the president threw his support behind a reform plan that would drastically reduce immigration to this country, editorial writers argued against it by pointing out that immigrants benefit the economy.

These arguments usually begin by stating that America is a “land of immigrants.” This not only is an insult to Native Americans and the descendants of those who were brought to this country against their will but also constitutes a sort of sleight of hand. It turns the stories of individual immigrants into the “story of America.” It’s one thing for individuals to base their sense of self-worth on their contribution to the American economy. It’s quite another to claim that America values immigrants because of this contribution: This paves the way to thinking that America should make decisions about immigrants based on whether they benefit the economy…

In fact, it’s not just the NYT that has been racist and inhumane, but other Democrats as well:

This is neither new nor specific to Republicans. Hillary Clinton’s campaign promised comprehensive immigration reform that would “bring millions of hardworking people into the formal economy.” Bernie Sanders’s platform promised to build an immigration system that would “match our labor market needs.” Responding to DACA’s repeal, the Senate Democratic leader Chuck Schumer mentioned “hardworking” people whose “contributions are vital to our economy.”

You see, we have so many more miles to go before we reach the Progressive Promised Land. Anything less is essentially neo-Nazism.

As long as politicians consider it necessary to qualify the victims as “hardworking” or “talented,” they fail to stand up to the administration’s fundamentally hateful immigration agenda.

Read that sentence above again.

The piece concludes with the the obligatory reference to St. Emma Lazarus (author of what Steve Sailer calls the Zeroeth Amendment) and all that her poem entails:

It’s not immigrants’ economic contribution that makes America proud; it’s its adherence to the words inscribed inside the base of the Statue of Liberty: “Give me your tired, your poor/your huddled masses yearning to breathe free” — from the Emma Lazarus poem that the White House adviser Stephen Miller waved away last month during a news conference on immigration reform…

If immigration is debated only in terms of whether it benefits the economy, politicians begin to divide people into two categories: “valuable” and “illegal.” When countries make people illegal, the world comes apart. When we agree to talk about people as cogs, we lose our humanity.

In other words, having any set of standards as to which immigrants we allow into the U.S. means we have lost our humanity.

Just when you think the Left can’t get any more surreal, they manage to outmaneuver the frames of the painting, vomiting onto the surrounding wall and floor.

And the floor is getting very slippery.

This entry was posted in Immigration, Left, NYT. Bookmark the permalink.