NYT: Shakespeare’s #Resistance in the Park

As if to rub the Right’s noses in some Central Park dogsh*t, the NYT has a piece titled “Protesters Outside ‘Julius Caesar’ in Central Park, and Laughs Inside”.

That very juxtaposition in the title, given a play about the brutal assassination of Julius Caesar Donald Trump, is itself quite telling. After mentioning the handful of protestors who showed up, the ‘reporters’ (Emily Palmer and Maya Salam, peace be upon him) describe just how the in-joke sophisticates watching the play reacted to some of the most unsubtle, agitprop crap you can imagine:

Inside the theater, the production began shortly before 8:15. Just minutes later, three theater staff members rushed toward the stage to inspect an audience member, then left.

Otherwise, the show took a self-aware bent and was filled with often-lighthearted political jokes. “Who is it in the press that calls on me?” Julius Caesar cried out to great laughs. And the audience booed when a character who represented an adviser was introduced. At one point, actors came out with protest signs and exclaimed, “Show me what democracy looks like! This is what democracy looks like!”

More laughter swelled when Caesar appeared sitting in a footed tub, smoking a cigar and typing on his phone, and again when the character playing his wife stepped into the tub, seducing him with a Russian accent.

The piece, like the liberal mantra elsewhere on this subject, is to point out that a 2012 version of the play (not in NYC, mind you, but in that great theater hub of Minneapolis) featured an Obama-looking POTUS and, so, why weren’t conservatives outraged about this?

Mary Andrews, 59, of Manhattan, who was hoping for a standby ticket — standby lines were closed because of high demand — was wondering where the backlash had been when another American production of “Julius Caesar,” in 2012 in Minneapolis, depicted Caesar as President Barack Obama.

The answer, of course, is that in that Obama-reign version of Julius Caesar, the ‘bad guys’ were depicted as the assassins, and the POTUS as the ‘good guy’ wronged (a separate recent NYT article notes of the Minneapolis version: “Five years ago, the Guthrie Theater in Minneapolis staged a production featuring the assassination of an Obama-esque Caesar by a group of right-wing conspirators.”)… whereas in this Trump-era version the assassins are quite clearly the ‘good guys’ and the POTUS most assuredly ‘bad’. 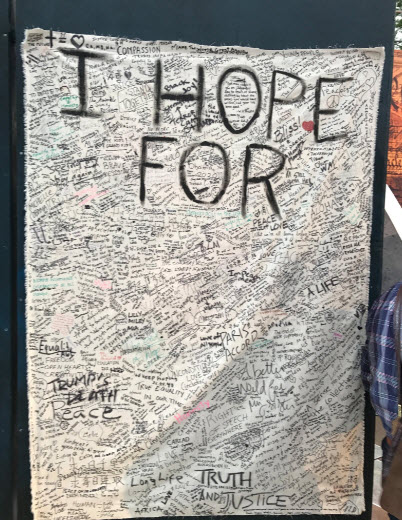 In a perfect embodiment of the NYT as purveyor of snark and fake news, there is this passage, accompanied by the photo below:

Before the production, a more reflective tone had been sought. Audience members were invited onto the stage to add a message to a poster reading “I mourn for” and “I hope for.”

People added words like, I mourn for: “innocents lost,” “Manchester,” “Brett” and “Apathy, Enemy of Democracy”; and I hope for: “Paris accord,” “a better life for my sister” and “unconditional love, including self-love.”

Above is all that is written about the poster, but take a close look at the poster itself (at least the biggest words you can even see), in letters so big the NYT editors must have missed them.

This entry was posted in Culture Wars, Left, NYT. Bookmark the permalink.