As we get closer to November and the reality of a Trump presidency remains a viable possibility, the NYT will become increasingly unhinged in its coverage.

Today, we have two not-unrelated stories, one atop the other: 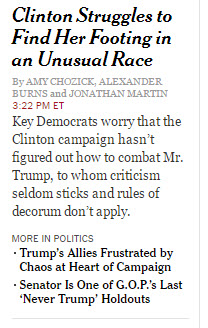 Mr. Trump’s campaign has engendered impassioned debate about the nature of his appeal and warnings from critics on the left and the right about the potential rise of fascism in the United States. More strident opponents have likened Mr. Trump to Adolf Hitler and Benito Mussolini…

…[T]he discussion comes as questions are surfacing around the globe about a revival of fascism, generally defined as a governmental system that asserts complete power and emphasizes aggressive nationalism and often racism. In places like Russia and Turkey, leaders like Vladimir V. Putin and Recep Tayyip Erdogan employ strongman tactics. In Austria, a nationalist candidate came within three-tenths of a percentage point of becoming the first far-right head of state elected in Europe since World War II.

In Hungary, an authoritarian government has clamped down on the news media and erected razor wire fences to keep out migrants. There are worries that Poland may follow suit. Traditional parties in France, Germany, Greece and elsewhere have been challenged by nationalist movements amid an economic crisis and waves of migrants. In Israel, fascism analogies by a former prime minister and a top general have again inflamed the long-running debate about the occupation of Palestinian territories…

“On a world level, the situation that affects many countries is economic stagnation and the arrival of immigrants,” said Robert O. Paxton, a professor emeritus at Columbia University and one of the most prominent scholars of fascism. “That’s a one-two punch that democratic governments are having enormous trouble in meeting.”…

Americans are used to the idea that other countries may be vulnerable to such movements, but while figures like Father Charles Coughlin, the demagogic radio broadcaster, enjoyed wide followings in the 1930s, neither major party has ever nominated anyone quite like Mr. Trump.

What do Jewish neocons think about all this?

“This could be one of those moments that’s quite dangerous and we’ll look back and wonder why we treated it as ho-hum at a time when we could have stopped it,” said Robert Kagan, a scholar at the Brookings Institution known for hawkish internationalism.

Mr. Kagan sounded the alarm this month with a Washington Post op-ed article, “This Is How Fascism Comes to America,” that gained wide attention. “I’ve gotten a lot of positive feedback from conservative Republicans,” he said. “There are a lot of people who agree with this.”

This entry was posted in Alt-Right, NYT. Bookmark the permalink.