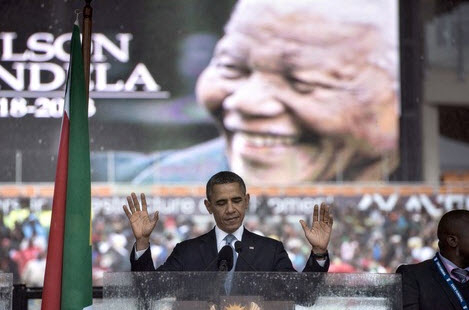 The Cuddly Koala Bear’s memorial was a perfect microcosm of African dysfunctionality and the historical revisionism surrounding the end of apartheid. On that day:

To this list we can add that the fake translator is also apparently experienced in that wonderful ANC tradition of ‘necklacing’ (warning: graphic video):

JOHANNESBURG –  The bogus sign language interpreter at last week’s Nelson Mandela memorial service was among a group of people who accosted two men found with a stolen television and burned them to death by setting fire to tires placed around their necks, one of the interpreter’s cousins and three of his friends told The Associated Press Monday.

But Thamsanqa Jantjie never went to trial for the 2003 killings when other suspects did in 2006 because authorities determined he was not mentally fit to stand trial, said the four. They insisted on speaking anonymously because of the sensitivity of the fake signing fiasco, which has deeply embarrassed South Africa’s government and prompted a high-level investigation into how it happened…

Necklacing was a method of killing that was fairly common during the struggle against apartheid by blacks on blacks suspected of aiding the white government or belonging to opposing factions. The method was also used in tribal disputes in the 1980s and 1990s…

This part also cracked me up:

Instead of standing trial, Jantjie was institutionalized for a period of longer than a year, the four said, and then returned to live in his poor township neighborhood on the outskirts of Soweto. At some point after that, they said, he started getting jobs doing sign language interpretation at events for the governing African National Congress Party.

This entry was posted in Africa, Cultural Marxism. Bookmark the permalink.