Dearth of a Salesman and Insomnia is Good For You are two comedy shorts, each 30 minutes long. They were made by the actor in 1957, the early period of his film career. 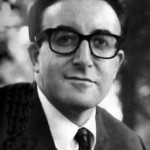 The studio behind the shorts, Park Lane Films, has long since closed down, but the films were discovered dumped outside the company’s offices in 1996. It is only now that they will be screened to the public for the first time…

In both films, Sellers assumes a number of roles, and appears to treat them as showreels to display a variety of his talents.

While he’s best known for his masterful performance in The Pink Panther (1963), as well as Dr. Strangelove (1964) and Being There (1979), Sellers’ prodigious cinematic output, while mediocre much of the time, has some other gems, most being of a ‘Swingin’ Sixties’ vibe.

Slowly, I’ve been checking out Sellers’ back catalogue and can recommend (in order of preference) these flawed, but endearing films:

This entry was posted in Film, Humor. Bookmark the permalink.