In Politico, Tim Alberta has a very good, lengthy profile of Pat Buchanan. If you want a pretty decent mini-biography of the guy, this is the piece:

Buchanan, for his part, feels both validated and vindicated. Long ago resigned to the reality that his policy views made him a pariah in the Republican Party—and stained him irrevocably with the ensuing accusations of racism, anti-Semitism and xenophobia—he has lived to see the GOP come around to Buchananism and the country send its direct descendant to the White House.

“I was elated, delighted that Trump picked up on the exact issues on which I challenged Bush,” he tells me. “And then he goes and uses my slogan? It just doesn’t get any better than this.” Buchanan, who has published such books as The Death of the West, State of Emergency, Day of Reckoning and Suicide of a Superpower, admits that November’s election result “gave me hope” for the first time in recent memory. 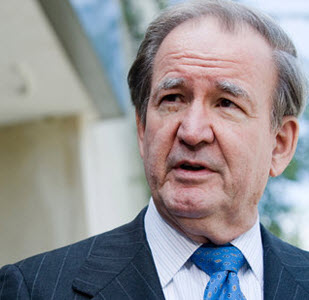 But none of this means he’s suddenly bullish about America’s future. Buchanan says he has “always been a pessimist,” and despite Trump’s conquest, two things continue to color his dark forecast for the nation. First, Buchanan harbors deep concerns over whether Trump, with his off-topic tweeting and pointless fight-picking, has the requisite focus and discipline to execute his nationalist agenda—especially over the opposition of a media-establishment complex bent on his destruction. Second, even if Trump delivers on the loftiest of his promises, Buchanan fears it will be too little, too late. Sweeping change was needed 25 years ago, he says, before thousands of factories vanished due to the North American Free Trade Agreement, before millions of illegal immigrants entered the country, before trillions of dollars were squandered on regime change and nation-building.

He’s not unlike the countless Trump voters I met across the country in 2016, many of them older folks yearning for a return to the country of their youth, a place they remember as safer, whiter, more wholesome, more Christian, more confident and less polarized. The difference is that Buchanan refuses to indulge in the illusion that a return to this utopia of yesteryear is even possible. Economically and demographically and culturally, he believes, the damage is done.

“We rolled the dice with the future of this country,” he tells me. “And I think it’s going to come up snake eyes.”

Of today’s political parallels with the Nixon era and his worries about Trump:

For all the comparisons of Trump to his own campaigns, Buchanan argues the more relevant parallels are between the 45th and 37th presidents. “They both confronted bureaucracy and a hostile media that hated Nixon and hates Trump,” he says. “The ‘deep state’ wants to break Trump’s presidency, just like it tried to break Nixon’s.” One difference between the two men is restraint: Whereas Trump appears consumed by “irrelevant things and peripheral attacks,” Buchanan says, “Nixon told me, ‘Don’t ever shoot down. Always shoot up.’” He lets out a sigh. “I feel for the guys that are in there,” Buchanan says of Trump’s team. “The problem is the president is distracted—and his adversaries know it. If I were them, I’d keep egging him on.”…

Buchanan says Trump has “tremendous potential,” but adds, “This is my great apprehension, that the larger issues—the taxes, the Obamacare thing, the border security agenda, the trade agenda—could be imperiled by unnecessary fights.” He thinks for a moment. “It’s not a bad instinct to be a fighter. But sometimes you have to hold back.”

When it comes to Trump’s fight with the news media, however, Buchanan wants the president to keep swinging. Not only is it justified, he says, based on recent coverage, but Buchanan—a journalist by training—believes undermining the media’s legitimacy is essential to winning popular support for the president’s agenda. Here again, he speaks from firsthand experience in yet another American political war, the Nixon administration’s assault on the Fourth Estate. After the president’s November 1969 speech responding to nationwide protests against the Vietnam War was panned by all three major television networks, Nixon asked Buchanan to craft a memo detailing the president’s successes in his first year; instead, the young speechwriter advised the White House to wage “an all-out attack on the media.” Nixon liked the idea, but he didn’t want to be the messenger. Buchanan drafted the speech, and 10 days after Nixon’s nationally televised address, Vice President Spiro Agnew, an imposing figure who was then one of the most popular Republicans in America, delivered his now famous speech in Des Moines slamming “a small and unelected elite” who possess a “profound influence over public opinion” without any checks on their “vast power.”

Conservatives loved it, especially on the heels of Nixon calling them “the great silent majority,” a phrase Buchanan had coined. The entire sequence remains one of Buchanan’s career highlights—“it was a sensation,” he says of Agnew’s speech—and he says it holds important lessons for Trump. For starters, the president needs a strong and reliable surrogate. “Nixon would give Agnew all the lines he wanted to say, but couldn’t say because he was the president. Trump needs somebody like that—he’s doing it all by himself,” Buchanan says. He smirks. “Is Mike Pence going to do that?”

Moreover, Buchanan argues, calling out media bias has consistently worked in the 48 years since Agnew’s speech—and still does. “What we did was call into question their motives and their veracity. We said they are vessels flying flags of neutrality while carrying contraband,” Buchanan tells me. “And that’s a message that is still well received today, because people know it’s true.”…

Buchanan sees fewer parallels between Reagan and Trump, though he offers two cautionary notes from his experience in that administration. First, he says, Trump must be “conscious of the coalition that brought him here” the way Reagan was responsive to the concerns of working-class cultural conservatives; Buchanan is particularly concerned that Trump, in addition to not following through on border security and protectionism, could hurt his own older and blue-collar voters with any type of dramatic health care overhaul. Second, Buchanan, in a nod to Trump’s testy public demeanor, remembers that Reagan’s famously sunny disposition wasn’t always on display—he just made it seem that way. “I saw Reagan explode a number of times in private. He was an Irishman, and you could see that temper go off,” Buchanan tells me. “But he never let the anger show in public.”

Of Trump’s attacks on Buchanan in the early aughts, and Trump’s subsequent regret at those attacks:

Less memorably, the 2000 campaign also brought Buchanan into contact for the first time with Trump. The New York real estate tycoon and tabloid favorite was also mulling a run for the Reform Party’s nomination at the urging of Jesse Ventura, the former professional wrestler who had won Minnesota’s governorship on the third-party ticket in 1998. Trump never followed through, but true to the form he would display 16 years later, the future president took pleasure in brutalizing his potential competition. Trump devoted portions of a book to highlighting Buchanan’s alleged “intolerance” toward black and gay people, accused him of being “in love with Adolf Hitler” and denounced Buchanan while visiting a Holocaust museum, telling reporters, “We must recognize bigotry and prejudice and defeat it wherever it appears.”

Trump’s attacks stemmed from Buchanan’s suggestion in a book that year that World War II had been avoidable and that Hitler did not want conflict with the United States or its Western allies. Buchanan, who loathes international aggression—he vigorously opposed George W. Bush’s war in Iraq, further distancing himself from the GOP—has written and repeated similar sentiments about World War II over several decades, which, on top of his criticisms of Israeli influence over U.S. foreign policy, have led to charges of anti-Semitism. (Most damaging was William F. Buckley writing in National Review, shortly before Buchanan joined the 1992 race, that he could not defend his fellow conservative against such accusations. That said, some Jews in the media who are critical of Buchanan’s politics, including Kinsley, have defended him on this front.)

Buchanan has faced his share of critiques, but no one has hit him harder than Trump. In retrospect, it’s astounding that the man who used Buchanan’s playbook to win the White House had previously bashed him in the most ruthlessly ad hominem terms imaginable—yet Buchanan used his columns to cheerlead Trump’s 2016 candidacy from Day One. The explanation for this became clear once I accepted that Trump had done something entirely out of character: According to multiple sources, Trump called Buchanan out of the blue some five years ago, when the former candidate was a regular guest on “Morning Joe,” and apologized for all of the hurtful things he had said. “He made amends,” Bay Buchanan, Pat’s sister and former campaign manager, says of Trump. “Long before he got into the presidential [race], he reached out to Pat and apologized for what he’d done, realizing it had been wrong. … My brother is a very forgiving guy, and if someone asks for forgiveness, he’s going to deliver it.”

Buchanan himself refuses to comment on private conversations with Trump but does tell me the president would call occasionally during the 2016 primary to thank him for kind words during a TV appearance or make small talk about the campaign. Buchanan also says Trump mailed three “Make America Great Again” hats to his home—two of which he gifted to childhood friends, while keeping the other one for his extensive collection of presidential memorabilia.

“Did you ever offer him any advice?” I ask.

Buchanan begins to shake his head no, then stops himself. “I gave him some advice once,” he says, a smile spreading across his face. “I think he took it.”

Of Buchanan’s depiction of 1950s America as an idyllic high-water mark:

Buchanan will go to his grave believing exactly that. He swears he has no personal animus toward people who don’t look like him; in fact, he says, the immigrant groups he interacts with in northern Virginia are “always smiling” and seem like wonderful members of the community. “Obviously they love America,” Buchanan tells me. “The question is, what is it that holds us together? The neocons say we’re an ideological people bound together by what Lincoln said at Gettysburg and what Jefferson wrote in the Declaration of Independence, and that’s what makes us one nation. But my tradition of conservatism says it’s not; it’s the idea of culture and faith and belief and history and heroes and holidays.”

He takes a long pause. “Can you have a nation that consists of all the people in the world—and be one people?”…

“This is why we argued in 1990 for a moratorium on immigration—those folks coming in poor could have been like the ethnic Irish and Italians and German,” Buchanan says. Instead, “they keep coming, and now you’ve got 60 million Hispanics living here, many of them in enclaves that can sustain themselves culturally and economically and socially. And it’s like they’re at home. A little piece of Mexico has been moved over here. … You look at the 24 counties from San Diego to Brownsville, Texas: Are they part of the United States or part of Mexico?”…

Buchanan has only become more alarmed about America’s political trajectory. The Republican Party is “running out of white folks,” he says, and historically immigrant groups have voted overwhelmingly Democratic. “If you bring in 100 million people and they vote 60 percent Democratic and 40 percent Republican, you’re buried,” Buchanan tells me. “What I’m saying is the America we knew and grew up with, it’s gone. And it’s not coming back. Demographically, culturally, socially, in every way, it’s a different country. And I think it’s come to resemble more of an empire than a nation and a people.”

This entry was posted in Alt-Right, Death of the West, Republican Party. Bookmark the permalink.