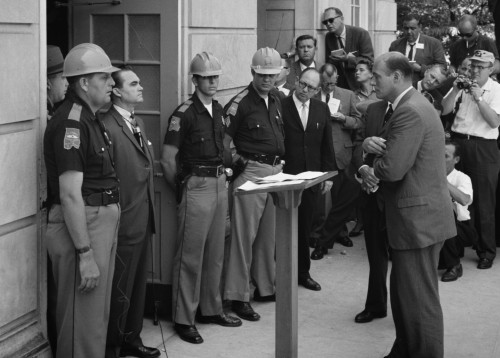 In my previous post, David Boaz’s mention of George Wallace‘s 1968 third-party, presidential run (on behalf of the American Independent Party) got me thinking… Sigh… What might have been.

His symbolic ‘Stand in the Schoolhouse Door‘ at the the University of Alabama has become iconic, a harbinger of things-to-come in terms of states rights and secessionist impulses (“segregation now, segregation tomorrow, segregation forever…”)

As an insurgent, third-party candidate for President in 1968, Wallace was the original ‘small donor’ grassroots candidate, long before Obama in ’08.

In ’68, as inflated black ego led to rioting (several years after the Civil Rights and Great Society legislation), Wallace was primed to capitalize on the quickly emerging white backlash.

And he had John Wayne backing him.

From an NPR piece on Wallace’s campaign:

Wallace needed a substantial war chest to sustain his campaign against Nixon. (After the debacle of the Democratic Convention, Hubert Humphrey was not considered a serious threat, and he and Wallace were appealing to opposite constituencies.) The Wallace campaign succeeded in raising nine million dollars, mostly from contributions of under fifty dollars, although Wallace also accepted large donations from people like Bunker Hunt, a wealthy Texas oilman, and John Wayne, who reportedly inscribed one of his checks to Wallace “Sock it to ‘em, George.”…

Wallace’s tirades against hippies, the Supreme Court, and big government, and his ennobling of the white working class — “this man in the textile mill, this man in the steel mill, this barber, this beautician, the policeman on the beat,” as the candidate said in one speech — traveled better than the pundits had predicted. About a month before the election, polls showed that as much as 23 percent of the electorate supported George Wallace for president.

But Wallace’s choice of vice-presidential running mate eroded those numbers. General Curtis LeMay, a former Air Force Chief of Staff, was known for both his blunt manner and his belief in the necessity of the atom bomb. This association with nuclear weapons, along with a growing public perception of Wallace as “dangerous” — due to confrontations between dedicated Wallace followers and anti-Wallace demonstrators at rallies — hurt Wallace’s campaign. (At an October rally at Madison Square Garden, police had to rescue several black protesters who were surrounded by Wallace supporters chanting “Kill ‘em, kill ‘em, kill ‘em.”) In addition, white Southerners began to wonder if Wallace’s candidacy was going to split the conservative vote with Nixon and put Hubert Humphrey in the White House.

From the Wikipedia page on Wallace’s campaign: 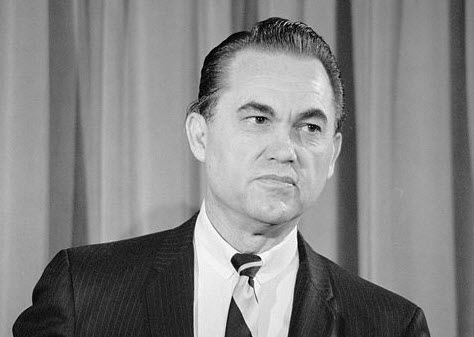 Wallace’s campaign rhetoric became infamous, such as when he pledged “If any anarchists lie down in front of my automobile, it will be the last automobile they ever lie down in front of” and asserted that the only four letter words that hippies did not know were w-o-r-k and s-o-a-p. He accused Humphrey and Nixon of wanting to desegregate the South. Wallace proclaimed, “There’s not a dime’s worth of difference between the Democrat and Republican parties,” a line that he had first used in 1966, when his first wife, Lurleen Burns Wallace, ran successfully for governor against the Republican James D. Martin…

Many found Wallace an entertaining campaigner, regardless of whether they approved of his opinions. To hippies who said he was a Nazi, he replied, “I was killing fascists when you punks were in diapers.” Another memorable quote: “They’re building a bridge over the Potomac for all the white liberals fleeing to Virginia.”

The Wallace campaign was comfortably ahead in Alabama, Mississippi, and Louisiana. Wallace’s aides insisted that the campaign focus on winning the Carolinas, Florida, Georgia, and Tennessee. Wallace refused, stating that he was running a “national campaign,” and traveled from Boston to San Diego in the of the campaign. There were rallies in 33 cities in the North during this period, but Wallace stopped only one time each in Tennessee, North Carolina, and Georgia.

On October 24, 1968, Wallace spoke at Madison Square Garden before “the largest political rally held in New York City since Franklin Roosevelt had denounced the forces of ‘organized money’ from the same stage in 1936″. An overflow crowd of 20,000 packed the Garden while pro- and anti-Wallace protesters clashed with more than 1,000 police across the street. In a now-famous reference to a protester that had lain down in front of Lyndon B. Johnson‘s limousine the year before, Wallace stated, “I tell you when November comes, the first time they lie down in front of my limousine it’ll be the last one they ever lay down in front of; their day is over!

Richard Strout, the influential columnist for the New Republic, sat in an upper balcony. For more than forty years, he had reported on the American political scene, under the by-line “T.R.B. from Washington,” but nothing had prepared him for the spectacle he encountered at the Garden that night. “There is menace in the blood shout of the crowds,” he wrote his readers. “You feel you have known this somewhere; never again will you read about Berlin in the 30’s without remembering this wild confrontation here of two irrational forces.” The American “sickness” had been localized in the person of George Wallace, the “ablest demagogue of our time, with a voice of venom and a gut knowledge of the prejudices of the low-income class.” He would not win, said Strout, and his strength was declining, “but sympathy for him is another matter.”

When asked what he considered the “biggest domestic issue for 1968,” Wallace replied:

“It’s people—our fine American people, living their own lives, buying their own homes, educating their children, running their own farms, working the way they like to work, and not having the bureaucrats and intellectual morons trying to manage everything for them. It’s a matter of trusting the people to make their own decisions.”

On the campaign trail, Wallace often repeated this theme, saying:

“What are the Real issues that exist today in these United States? It is the trend of the pseudo-intellectual government, where a select, elite group have written guidelines in bureaus and court decisions, have spoken from some pulpits, some college campuses, some newspaper offices, looking down their noses at the average man on the street.”

How close did Wallace come to the Presidency? Keep in mind, this was not a GOP primary. Wallace’s ran an insurgent third party campaign in the general election itself;

Wallace’s “outsider” status was once again popular with voters, particularly in the rural South. He won almost 10 million popular votes, carried five Southern states, came fairly close to receiving enough votes to throw the election to the House of Representatives, and became the last person (as of 2013) who was not the nominee of one of the two major parties to win electoral votes. He was the first such person since Harry F. Byrd, an independent segregationist candidate in the 1960 presidential election. (John Hospers in 1972, Ronald Reagan in 1976, Lloyd Bentsen in 1988 and John Edwards in 2004 all received one electoral vote from dissenters, but none “won” these votes.) Wallace also received the vote of one North Carolina elector who was pledged to Nixon.