H.R. Giger, the Swiss artist who shot to fame when his aesthetic style (i.e., ‘biomechanoids’) was tapped by Ridley Scott for Alien (1979), has died at age 74.

The terrifying creature and sets he created for Ridley Scott’s film earned him an Oscar for special effects in 1980. In the art world, Giger is appreciated for his wide body of work in the fantastic realism and surrealistic genres…

Film work was just one of his talents. Giger is also known for his sculptures, paintings and furniture. The H.R. Giger Museum, inaugurated in the summer of 1998 in the Château St. Germain, is a four-level building complex in the historic, medieval walled city of Gruyères. It is the permanent home to many of the artist’s most prominent works.

However his art is not for people with weak nerves. Critic Fritz Billeter once wrote that Giger’s work was “loaded with eroticism tending often towards the shocking and the sadistic” and sometimes taking the form of an “orgiastic cult”.

Giger’s so-called biomechanoids represent a large share of his work. His representations of these creatures is a mixture of human and mechanical parts, with a strong focus on sexuality that can be disturbing for the viewer.

These biomechanoids are to be seen in many of Giger’s paintings and drawings, but the theme is also common to his sculptures and furniture. 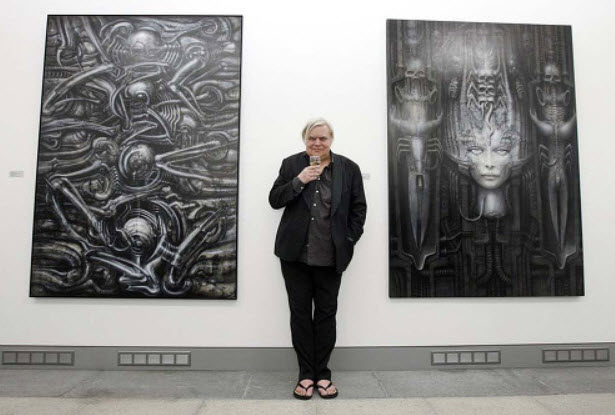 This entry was posted in Art, Film. Bookmark the permalink.