While the Koch Brothers appear to be on the #NeverTrump Train, Sheldon Adelson, of all people, is joining the Trump Train.

The casino magnate Sheldon G. Adelson told Donald J. Trump in a private meeting last week that he was willing to contribute more to help elect him than he has to any previous campaign, a sum that could exceed $100 million, according to two Republicans with direct knowledge of Mr. Adelson’s commitment.

As significant, Mr. Adelson, a billionaire based in Las Vegas, has decided that he will significantly scale back his giving to congressional Republicans and direct most of his contributions to groups dedicated to Mr. Trump’s campaign. The two Republicans familiar with Mr. Adelson’s plans spoke anonymously because they were not authorized to discuss the matter publicly…

In 2012, [Adelson] contributed at least $98 million to Republican efforts, according to a study by ProPublica. But that money went to 34 separate campaigns and groups…

What to make of this?

Mr. Adelson and his wife, Miriam, met with Mr. Trump and his campaign manager, Corey Lewandowski, at the St. Regis Hotel in Midtown Manhattan while Mr. Adelson was in town for a gala dinner to benefit the World Values Network, an organization dedicated to disseminating Jewish values in politics, culture and media. The two moguls, who do not know each other well, had met earlier in the campaign.

Mr. Trump assured the Adelsons that he was dedicated to protecting Israel’s security, an issue about which the couple are passionate.

The Adelsons contributed to Senator Ted Cruz of Texas during the Republican primaries, but kept a far lower profile than they had in 2012, when Mr. Adelson was a major benefactor of Newt Gingrich. Mr. Trump targeted Mr. Adelson on Twitter in October, writing that Mr. Adelson wanted to make Senator Marco Rubio of Florida “his perfect little puppet.”

But Mr. Adelson was plainly not bothered — or he at least forgave Mr. Trump. He told reporters last week he would get behind Mr. Trump and wrote an op-ed article in Friday’s Washington Post extolling his fellow casino owner. 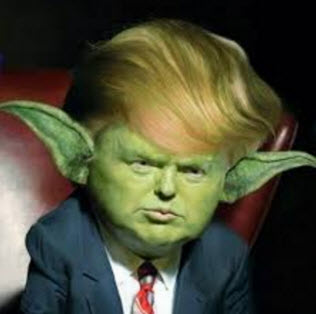 “He is a candidate with actual CEO experience, shaped and molded by the commitment and risk of his own money rather than the public’s,” Mr. Adelson wrote, adding that Mr. Trump “has created a movement in this country that cannot be denied.”

When it comes to the head-games of politics, is Trump aloof or a natural born Jedi Master?