While cinemas around the country (and the world?) get force-fed, largely against their will, Oscar-bait stuff like 12 Years A Slave, here’s something to contemplate, for a bit of perspective (NYT: “Rio’s Race to Future Intersects Slave Past“):

Brazil received about 4.9 million slaves through the Atlantic trade, while mainland North America imported about 389,000 during the same period, according to the Trans-Atlantic Slave Trade Database, a project at Emory University…

Altogether, Rio received more than 1.8 million African slaves, or 21.5 per cent of all slaves who landed in the Americas, said Mariana P Candido, a historian at the University of Kansas.

‘The United States was the worst promulgator of slavery.’

This tends to be the knee-jerk assumption of the public at large, and who can blame them when politically-correct, historical revisionism constantly reminds us of the unique sins of the United States when it came to slavery.

The sentiment, however, is entirely false. By a long shot. Every society has practiced slavery. The United States was one of the first nations anywhere in the world to ban slavery. Furthermore, the treatment of slaves in the United States was measurably better than in Portugese and Spanish colonies, both of whom accounted for the vast majority of the transatlantic slave trade.

There is a slew of myths surrounding the history of slavery and the history of U.S. slavery in particular. This is not to condone slavery, but simply to provide context within which to analyze the institution of slavery.

With a deeper knowledge of the history of slavery and its empirical realities from country to country and region to region, one can better situate slavery as it actually existed in the United States and then compare it, through objective means, to the slave practices as they existed elsewhere around the world.

The following graph of the transatlantic slave trade provides an overview of the numbers of slaves imported by colonial power and region.

For two hundred years (1440-1640), Portugal had a monopoly on the export of slaves from Africa. It turns out that Portugese colonialists would purchase slaves along the west coast of Africa (with the full and active co-operation of African kings and merchants) and ship the slaves to work in the Portugese colonies of Brazil, where they mined and worked sugar cane fields. The numbers above are for slaves imported from Africa only and do not account for the untold number of indigenous Indians of Brazil (Tupi) whom Portugal also enslaved.

Second in line for the pure volume of trans-Atlantic slave trade holdings was Spain. A leading world power in the 15th century, Spanish navigators (of which Christopher Columbus was the most famous) set up slave-fueled colonies in Mexico, Central and South America, and the Caribbean islands. The numbers above do not account for the untold number of indigenous Indians of the American continent whom Spain enslaved.

Slavery in the British and French Caribbean was particularly harsh on the respective sugar estates (West Indian colonies held by European powers).

African slaves imported to British North America and what would become the United States accounted for only 4.4% of the historical trans-Atlantic slave trade. The associated cost to import a slave into the U.S. was relatively high, approximately $38,000 in today’s dollars. Hence, dangerous work was generally relegated to unskilled Irish immigrants (Ireland was the one European country without a university tradition) and various other white indentured servants from Europe. The importation of slaves into the United States was banned on January 1, 1808. 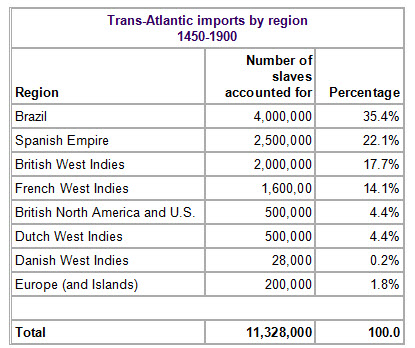 Data derived from Table II of: The Slave Trade by Hugh Thomas, Simon and Schuster (1997). Graph via http://africanhistory.about.com/library/weekly/aa080601a.htm

This entry was posted in Black, History. Bookmark the permalink.