Spirit of Andrew Breitbart will be in WH

From a Fox News story on reaction to the Bannon appointment:

Critics are pointing to opinion and editorial stances by Breitbart during his decade-long tenure and charging his prominence in a Trump White House would bring more than just populist nationalism to the White House.

“Stephen Bannon was the main driver behind Breitbart becoming a white ethno-nationalist propaganda mill,” the Southern Poverty Law Center tweeted. “Trump should rescind this hire. In his victory speech, Trump said he intended to be president for ‘all Americans.’ Bannon should go.”…

The Anti-Defamation League also expressed its outrage over Bannon’s appointment, calling it a “sad day.”

“We call on President-elect Trump to appoint and nominate Americans committed to the well-being of all our country’s people,” the group’s chief executive Jonathan Greenblatt said, according to The Washington Post.

Even GOPErs are on the ‘Bannon = KKK’ bandwagon:

While opposition to Bannon from Democrats and CAIR might be expected, John Weaver, a Republican strategist who worked for Ohio Gov. John Kasich’s presidential campaign, also piled on.

I particularly loved this:

Bannon’s rise has led critics to dredge up past controversies, including a report that his ex-wife of Bannon said in the 1990s that he expressed fear of Jews when the two battled over sending their daughters to private school nearly a decade ago, according to court papers reviewed this summer by The Associated Press. In a sworn court declaration following their divorce, Mary Louise Piccard said her ex-husband had objected to sending their twin daughters to an elite Los Angeles academy because he “didn’t want the girls going to school with Jews.”

A spokeswoman for Bannon denied he made those statements.

Then (after 3 solid days of faux-introspection!) the NYT goes right back to full hysteria mode: 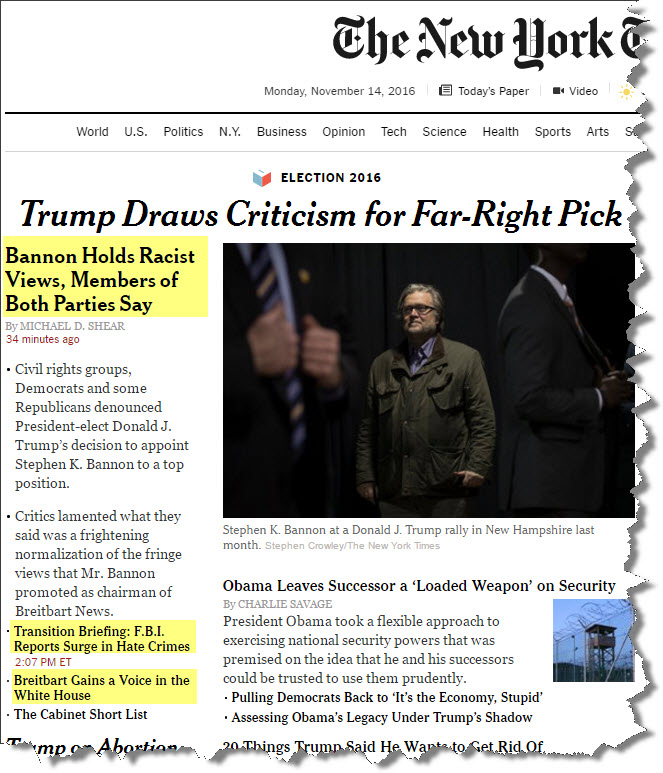 Did you ever think we’d be in this position?