BBC Radio 4 has a series on music, with an episode focused on the song “Strange Fruit”, made famous by Billie Holiday. Here is the BBC’s description of the episode:

“Southern trees bear a strange fruit, blood on the leaves and blood at the root…” Billie Holiday’s famous song expresses the horror and anguish of those communities subjected to a campaign of lynching in the American South. Soul Music hears the stories of people whose relatives were lynched by white racists and of the various forms of grief, anger and reconciliation that have followed. These include the cousin of teenager Emmett Till, whose killing in 1955 for whistling at a white woman, added powerful impetus to the civil rights movement.

Despite its association with the deep south, the song was actually composed in 1930’s New York by a Jewish schoolteacher, Abel Meeropol. Meeropol adopted the children of Julius and Ethel Rosenberg after they were executed in 1953 as Soviet spies. One of those children, Robert, talks of his adopted father’s humanity and his belief that the Rosenberg’s were killed in a ‘state sanctioned lynching by the American government’.

Meeropol first published the song’s lyrics in the Marxist publication The New Masses.

While less so today, in the critical decades when a heightened sense of ‘black consciousness’ (as pure victim of evil whites) was being formulated and then disseminated throughout popular culture, much of this culture was being produced not by blacks… but by Jews.

(PBS’s Great Performances series has an excellent episode on “Broadway Musicals: A Jewish Legacy” that is quite instructive on the subject. While it’s true that, for example, Irving Berlin wrote the songs “White Christmas”, “Easter Parade”, and “Happy Holiday”, the point is not that all Jews universally promote Jewish ethnocentrism by undermining white ethnocentrism. Rather, the point is that a very significant number of influential Jews do work towards the suppression and destruction of white racial consciousness, but typically do so subconsciously, under the ruses of ‘communism’, multiculturalism, or other egalitarianisms which, upon reaching their logical conclusions, are tantamount to the marginalization of whites — e.g., pathological altruism.)

And, by the way, all those songs promoting the multicultural line… the ‘America is a land of immigrants’ nonsense…

“America” from West Side Story? Music by Leonard Bernstein. Lyrics by Stephen Sondheim. (Read Tom Wolfe’s Radical Chic to see just how leftwing Bernstein was in his support of the Black Panther Party and other leftwing causes.)

“America” by Neil Diamond? Neil, like many other Brooklyn Jews, is writing from a certain perspective, the particular diaspora-infused worldview that was, and still is, alive and well throughout the Jewish community in NYC. 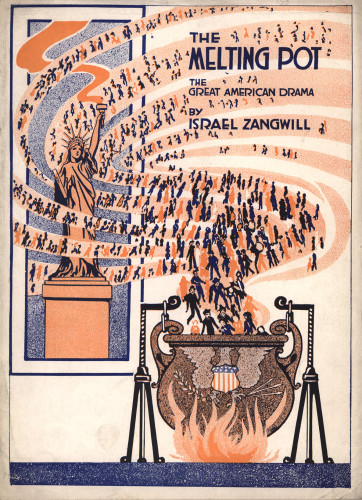 Hell, the “Melting Pot” metaphor itself (a relatively late, and patently inapplicable metaphor for America’s formative years, and one that has done irreparable harm to the U.S. and it’s future) was created by Israel Zangwill in his 1908 play The Melting Pot.

In terms of what comes out of Hollywood, arguably the most dominant producer and shaper of ‘culture’, where to begin?.. The collective phenomena that is “Hollywood” (particularly insofar as it is a leftwing propaganda machine) is, after all, the cumulative layering of individual instances, individual scripts and films that get made by individual writers, directors, and producers.

The disproportionality to which Jews (approximately 2% to 3% of the general population) represent ‘Hollywood’ (e.g., especially in the more salient fields of writing, directing, and producing) is nothing short of stunning. In terms of particular films and the individuals responsible for making them, you’re literally talking about thousands of examples.

Again, the diaspora-haunted consciousness of the Jew, its frame of reference, has come to dominate Culture itself.

Vilified are the latent perspectives of Gone With The Wind, Song of the South, or (God forbid) Birth of a Nation. All we get now is a continuous stream of liberal, historical revisionism, which has a compounding effect, especially when generation after generation of youth discover ‘the world’ through movies and television.

Amistad? Steven Speilberg failed to mention that the slave Cinque returned to Africa (where Arabs and Jews were running the slave trade for a thousand years before whites ever showed up) and… drumroll… became a slave trader himself.

Roots? The depictions in this late ’70s, ABC mini-series (e.g., tranquil and idyllic village of peaceful Africans invaded by evil white men who snatch them up and haul them onto slave ships) arguably did more to shape America’s popular conception of the history of slavery than any other cultural artifact. The only problem: Alex Haley’s entire account of his own family’s alleged history (the basis of his book and the subsequent movie) was a complete hoax and something of a wish fulfillment for Haley. That didn’t stop the massive memetic force of the Roots juggernaut though, which has probably done more to shape (or I should say ‘mis-shape’) America’s perspective on slavery. And, consequently, it has probably contributed more to white self-loathing than any other single thing in culture.

Take a look at the Board of Directors of the fledgling new online channel called “Black Heritage Network“. Notice a pattern?

And it’s not just in culture…

When you look at historically influential, political action groups whose very existence revolves around racial grievance (against whites, that is), you will usually find it’s been created by (or completely dominated by) members of the Tribe.

NAACP? Started and run (in its formative years) by Jews.

Anti-Defamation League (ADL)? While this organization poses as an all-purpose, racially colorblind entity, it’s selective outrage starts to make sense when you read the ADL’s charter:

“The immediate object of the League is to stop, by appeals to reason and conscience and, if necessary, by appeals to law, the defamation of the Jewish people. Its ultimate purpose is to secure justice and fair treatment to all citizens alike and to put an end forever to unjust and unfair discrimination against and ridicule of any sect or body of citizens.

Southern Poverty Law Center (SPLC)? This even more annoying and ‘colorblind’ organization is vile in its hatred of all things white. Dominated by Jews.

ACLU? This organization, ever busy being selectively-outraged by crosses on display in public squares, is dominated by Jews and has been for most of its existence. (Just look at their current Leadership as an example.)

People for the American Way? Ditto.

But we can’t even discuss this sort of thing — as a viable, if debatable subject — in public.