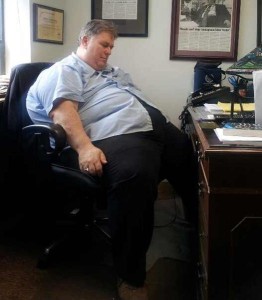 The 400-pound president of Local 983 of District Council 37 — the city’s largest blue-collar municipal-workers union — often downs a huge meal, then drops into dreamland in the early afternoon, members of the union’s executive board told The Post.

“He eats lunch when he arrives at work at 2 p.m. Then, like clockwork, he goes to sleep with a cup of soda on the table and the straw in it,” said Marvin Robbins, a union vice president.

“Then he wakes up, looks at his watch and says, ‘I have to get out before the traffic gets bad.’ He’s usually out by 4 p.m. after being at the office two hours.”…

Union officials say he racks up $1,400 in monthly food bills on the union dime…

They say he significantly overorders at eateries like Dallas BBQ, the Stage Door Deli and Pine Restaurant in The Bronx, a hangout for local politicians, and takes the extra food back to his Bronxdale apartment.

In Rosenthal’s defense, he does have a recognized disability:

He said it’s normal for executives to take “power naps.”

He also blamed his meetings with the sandman on the effects of pain medication he takes for backaches he has suffered since he fell through a chair at a McDonald’s last year.

This entry was posted in Left. Bookmark the permalink.