The (pro-gay-marriage and likely liberal) rapper Macklemore wears this costume onstage and, instantly, a finger points at him from… drumroll… a walking stereotype of a Jew. 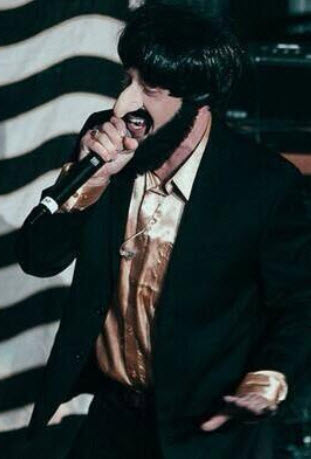 Meanwhile, the new film Welcome To New York depicts the sexual exploits of Dominique Strauss-Kahn. Because Strauss-Kahn is Jewish, well, naturally, fingers point at the filmmaker for being… drumroll… ‘anti-semitic’:

Welcome To New York is inspired by the 2011 sex scandal surrounding former International Monetary Fund chief Dominique Strauss-Kahn. Gérard Depardieu, in various instances of near-pornographic debauchery, stars as Mr Devereaux, a high-ranking French government offical who is detained in New York after he sexually assaults a hotel maid. Jacqueline Bisset plays his wife Simone, an heiress to a fortune amassed during World War II and a financial supporter of Israel. On France’s Europe 1 radio this morning, Strauss-Kahn’s attorney Jean Veil said his client has instructed his lawyers “to file a suit for defamation owing to the accusations of rape and insinuations which run throughout the film.” Veil said a suit would be filed within a few days, but that Strauss-Kahn had not, and will not, see the movie based on the recommendations of friends that he “protect himself.” He added that he agreed with Strauss-Kahn’s ex-wife Anne Sinclair who on Sunday called the film “anti-Semitic.”

An editorial penned by Sinclair, who is now editor of the French version of the Huffington Post, expressed her disgust at several things in the movie. They included Depardieu’s nudity, the “lousy” dialogue, how women are represented, and “especially the so-called face-off between Devereaux and Simone upon which the filmmakers project their fantasies about money and Jews.” The long scene comes near the end of the film when charges against Devereaux are dropped and he accuses his wife of being obsessed with money and power. Sinclair is the granddaughter of Paul Rosenberg, a renowned art dealer who escaped from the Nazis and was stripped of his French nationality by the Vichy government. “The allusions to my family during the war are degrading and defamatory. They say the opposite of what happened,” she wrote. “I never thought I would have to defend today their memory faced with such clearly anti-Semitic attacks.”

This entry was posted in Jewish, Political Correctness. Bookmark the permalink.