Here’s an image illustrating how Christianity can be force against a healthy sense of white identity.

In a special rite commemorating the Last Supper of Jesus with his disciples, Pope Francis washed and kissed the feet of 11 Muslim, Christian and Hindu asylum-seekers Thursday and declared them all children of the same Father.

The Holy Thursday ritual re-enacts Jesus washing his apostles’ feet before being crucified, and is meant as a gesture of service. Francis contrasted that gesture with the “gesture of war” carried out by the Brussels attackers on Monday…

Pope Francis knelt and washed the feet of four Catholics from Nigeria, three Eritrean women who are Coptic Christians, three Muslims from Mali, Syria and Pakistan, a Hindu man from India and an Italian woman who works at the center. Several migrants wept as Francis knelt before them, poured water from a brass pitcher over their feet, wiped them clean and kissed them.

My guess is that some of the Christian migrants were the ones crying, not the others, especially not the 3 Muslims.

The latter may have been crying from laughter at how easily the Christian West can be snookered into letting them in and, on top of it, making them into sacred symbols.

As one Breitbart commenter notes: “Something Mohamed would never do.” 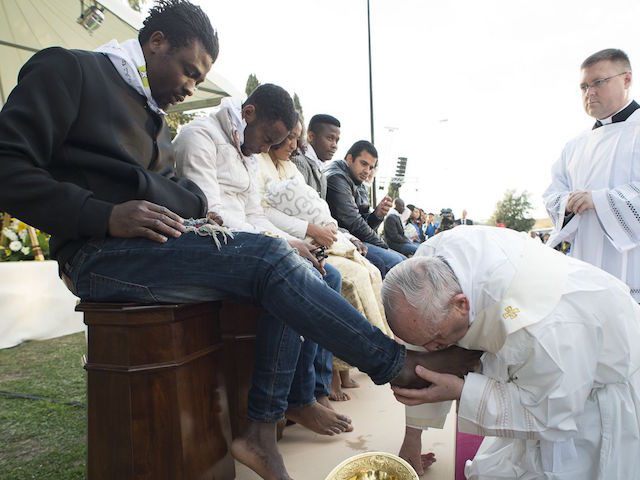 This entry was posted in Christianity, Immigration, Islam. Bookmark the permalink.