This picture is worth a thousand words:

A Cadillac-driving OUI suspect [from Haiti – Ed.] — charged with running a Boston Globe delivery truck off Interstate 93 and onto the Leverett Connector — was carrying three EBT cards, mocked a cop “for paying for food when she gets it for free” and threatened to put a voodoo curse on him, according to a police report. 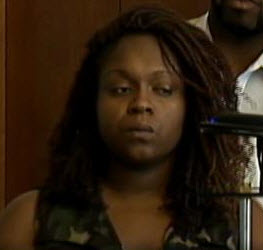 “I questioned her as to why she had other peoples (sic) EBT cards and she  began screaming that I was a ‘dumb (expletive)’ for paying for food when she gets it for free,” trooper William Koko­cinski wrote of Vivencia Bellegarde, 25, of Everett, noting she had her own electronic benefits transfer card and also the cards of two other people.

“She repeatedly called me a racist and told me she was from Haiti and she was gonna ‘put voodoo on my white (expletive),’” Kokocinski wrote. “(She) told me to Google her name and find out who I was ‘(expletive) with’. She further explained that her name translated means ‘give life take life’ and she emphasized ‘TAKE LIFE’. She then shouted that she was ‘coming for all you white (expletives).’”…

Bellegarde told cops she’d left a party prior to the crash, and “didn’t care about the guy she hit because he isn’t dead and that all she cares about is smoking a cigarette,” the report says.