Collectively, this trifecta of strategically placed NYT stories serves to reinforce a narrative the publication wants to push: 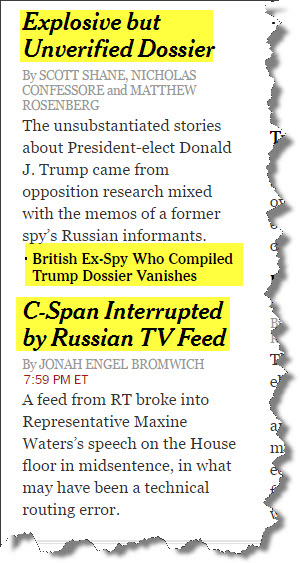 The “Explosive but Unverified Dossier” headline is itself a marvel to behold, with two rather starkly dissonant adjectives (especially for the ‘high quality’ journalism of the NYT) next to each other. (Rush had a great riff today about the intentional rhetorical effect of the rather pretentious word dossier. Why say ‘dossier’ when ‘report’ will do? Answer: the imprimatur of official, James Bond-styled, spy-related correspondence.

According to neighbors and news reports, Mr. Steele hurriedly left his home in Surrey, a county southwest of London, on Wednesday to avoid attention or possible retribution once his identity as the author of the dossier was revealed…

Finally, the “C-Span Online Broadcast Interrupted by Russian Network” piece (which, as I write this, is the #1 trending NYT article) is situated here in this top-of-the-NYT webpage for a reason: the headline reinforces the aforementioned narrative. The headline immediately and unmistakably implies the Russians must have hacked into C-SPAN and hijacked it’s signal. Furthermore, this happened while angry black Congresswoman Maxine Waters was giving a speech, no less! The hijacking was racist too.

But click the link and read the story and a more prosaic explanation for the interruption seems at hand:

Ms. Waters was cut off. Instead, they heard the jangling music of a feed from RT, a state-run Russian television network that has been accused of helping its government interfere in the American election.

Some on social media immediately assumed that the interruption, which lasted about 10 minutes, had nefarious implications.

C-Span, in a statement, had a simpler explanation: It was probably a technical error. C-Span’s television broadcast continued uninterrupted.

Noting that RT is among the news feeds it regularly monitors, it said: “We don’t believe we were hacked. Instead, our initial investigation suggests that this was caused by an internal routing error. We take our network security very seriously and will continue with a deeper investigation, which may take some time.”

This piece ends on an appropriately ominous note:

“I just think it’s strange,” Ms. Waters said. “At a time when our intelligence agencies are very confident and basically have confirmed that Russia hacked the D.N.C. and other political interests, and then we have, while I’m on the floor of the House, talking about Trump and Russia, I get interfered with and interrupted by Russia Today.”

Back in 1964, historian Richard Hofstadter wrote a much-heralded article titled “The Paranoid Style in American Politics”, which argued (immediately after Barry Goldwater’s win of the GOP primary) that such a win has been a culmination of sorts, perhaps a telos, of the groundswell of “conspiracy theories” among the nation’s conservatives, from Joe McCarthy and the John Birch Society and onward.

I’m still waiting for someone to write a followup book that applies this same thesis (of the “paranoid style” in American politics) to the Democratic Party.