A couple of months back, I wrote a long form piece in Counter-Currents on “The Red Pilling of Rod Dreher”, and I continually marvel at his inability to see where evidence should take him. I therefore continue to occasionally monitor where Dreher’s emotions take him this week or that.

In response to this New Yorker piece (“Where the Small-Town American Dream Lives On”), Rod Dreher today begins a section of his essay with a great first sentence… which he then completely contradicts in full cuck-a-cious glory:

I’ve read the piece twice now, and am struck by how much Orange City’s stability depends on cultural homogeneity. The author makes it clear that there’s an effort underway to reach out to the Latino immigrants who have moved into the area to work in the agricultural sector. I wonder, though, if that can succeed. Orange City is overwhelmingly Protestant (descendants of the Dutch Reformed Church); the immigrants are Catholic. Midwestern niceness is doing a lot of good work there, and I hope they are able to integrate the newcomers.

Orange City, Iowa is overwhelmingly Protestant and the immigrants are Catholic? That is the lens through which Dreher tries to predict what will happen with an influx of low-IQ, high-fertilitiy, Mexican laborers? Lol.

We are talking Iowa here! Replace “Protestant” with white, Rod, and “Catholic” with Mexican. Census data from 2010 shows the racial demographics of the historically-Dutch Orange City thusly: 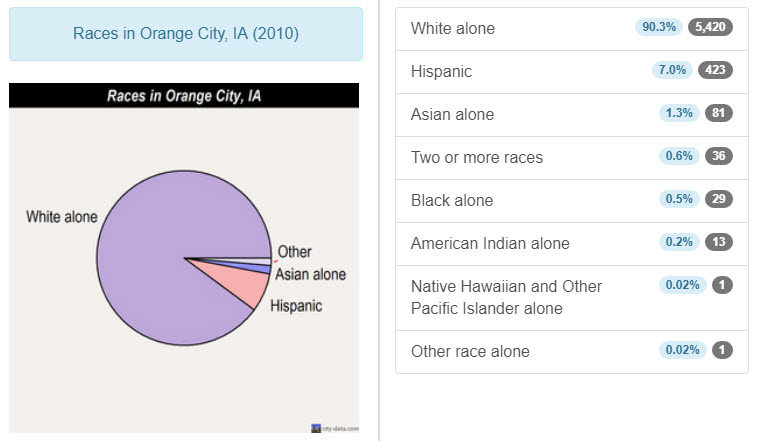 In the past ten years, a large number of Latino immigrants have moved into Orange City and nearby towns to work on the hog farms and the dairy farms and in the meatpacking plants. Although the change has been large and sudden—in just a few years, some school classes have gone from nearly all white to as much as thirty per cent Hispanic…

If, as the New Yorker piece implies, there has been a radical surge in Mexican, mestizo,  peasant class immigrants into quaint little Orange City, which serves to rapidly bring down it’s 90%+ white population (largely of Dutch ancestry) ratio, does Dreher seriously think the “neighborhood” won’t change and change significantly?

Still, it’s hard to imagine how you would live there happily if you didn’t share a lot of the values of the community. I suppose you can’t entirely separate out ethnicity from the picture, but look, I’m a white guy of northern European stock, and I can’t say that I would fit in there. Aside from my distinctly non-Protestant religious beliefs, I am culturally of the South, not the Midwest. And, to be fair, I so admire and envy the sense of stability and continuity the people of Orange City have — such an oasis in liquid modern America! — that I would not want to be the interloper who upsets what they have by not being able or willing to conform to their way of life.

Again, Dreher pays lip service to ethnicity, glossing over it, before moving on to other less unseemly possibilities.

Orange City, it should be pointed out, lies in Rep. Steve King’s district. From The New Yorker piece, we learn of another standard trope in the history of continually-expansive notions of ‘civil rights’ in America: outside leftwing agitation.

Last March, Steve King declared in a tweet: “Culture and demographics are our destiny. We can’t restore our civilization with somebody else’s babies.” Steve Mahr, who owned the coffee shop on Central Avenue, decided to do something. He wanted to demonstrate that not everyone in Orange City thought like King, so he organized a protest in front of the courthouse. Although it was raining that day, he was gratified to see nearly two hundred people turn up. Mahr didn’t grow up in Orange City; he came to Northwestern College from a tiny Iowa town sixty miles away. This was another benefit that the college brought—yearly crops of young people to replace the ones who left. These arrivals came with fresh ideas, but within limits: since Northwestern was a Christian college, it tended to attract those who fit.

One day, someone asked Mahr and another young man who worked in the coffee shop why they had stayed in Orange City after graduating, and both of them said, Kathleen Norris. Norris was a poet who, after living a bohemian life in New York City, had returned in 1974 to live in her late parents’ house in a small town in South Dakota…

Mahr also had another reason for staying. He thought of himself as an agitator, albeit a gentle one, and he wanted to push Orange City to live up to its religious ideals. Although he now considered himself a progressive Democrat, he’d been raised in a conservative Christian family and used to vote Republican, so he felt that the people in Orange City were his people and he knew how to talk to them. He believed that Orange City Christians could be moved by certain kinds of moral arguments—ones that depended on the sanctity of life, for instance, or the command to love thy neighbor. He had one such argument about refugees. Suppose you have a hundred babies before they’re born, he would say, and one of them might grow up to be a terrorist—should you abort all hundred babies just in case? Of course not, his interlocutor would say. Well, suppose you have a hundred refugees and one might be a terrorist—should you risk a hundred lives by turning them all away?

So, let’s turn every small rural white town in America into the Lower East Side. And let’s use the faulty logical comparisons one might find in a pot-hazed freshman dorm to get us there.

A town is not a voluntary association — and this is the difference between the Tipi Loschi and Orange City. As a legal matter, as well as a moral matter, it cannot decide who it will allow to settle there. One would not want Orange City to have the right to decide that only northern European Protestants could settle there. Yet it’s still a reasonable question to ask: how far can the people of Orange City go to accommodate newcomers, as well as hometown dissenters from the conservative status quo, without losing what makes their community so strong?

Or, to put it another way, how liberal can Orange City afford to be? (I mean “liberal” in the sense that most of us are broadly committed to liberal values of tolerance, individual freedom, equality before the law, and so forth.) Do the goods that are so strongly and beneficially present in Orange City depend on a culturally illiberal foundation that no one there talks about, and may not be fully aware of?

Yes, Rod, Little Utopias such as Orange City have relied on racial/ethnic homogeneity as a precondition of their relative utopianism. Going forward, should Orange City become just another multicultural hell-hole then, qua Robert Putnam, social capital will fall accordingly and Orange City will naturally become just like any other multicultural non-paradise. Dreher’s question should concern itself not with the foundation of the Orange City vibe, which has already come to be actualized long ago, but on what it will take to preserve that vibe.

For a nation that decades ago unilaterally relinquished a rational, pre-1965 immigration policy towards a flood of non-white, third world immigration, there is, in fact, a culturally illiberal dynamic required if Orange City is to preserve its vibe: it starts with white identitarianism and the realization that race matters. This realization then leads, naturally, to white nationalism as a normative value, even if this white nationalism simply takes the form of “Reduce third-world immigration”.