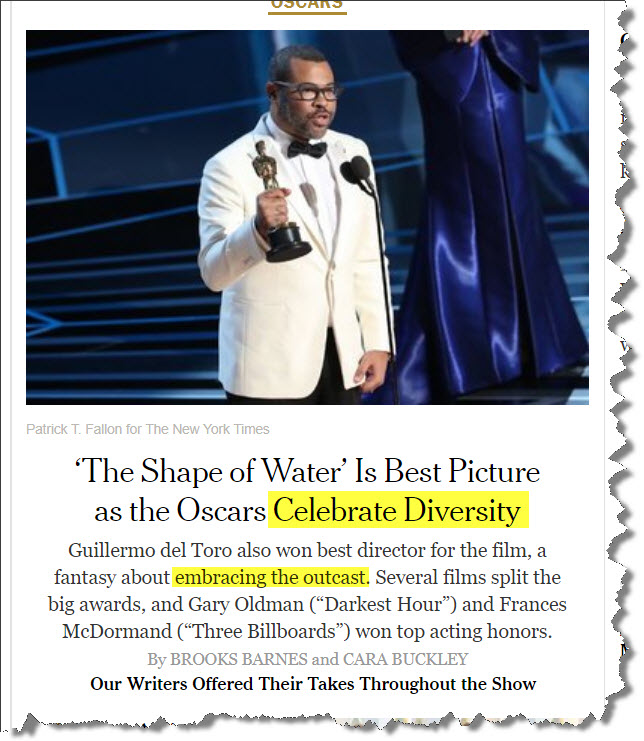 Thank God we have people like Nathan Duffy over at Thermidor, who went through the pain of watching The Shape of Water so that the rest of us can be spared:

It’s hard to overstate how absurd the SJW messaging of the film is. It’s essentially Tumblr: The Movie. The lead protagonist Elisa is a mute girl, not pretty, whose best male friend is an aging homosexual and whose closest lady friend at her janitorial job at some government facility is a sassy black woman. Lest you think you’ve ticked every diversity box (racial minorities, handicapped, gay), she later befriends a quasi-human-like beast and a Soviet spy with a heart of gold (!), filling out the roster of ‘others’ on the fringes.

We also learn early on that our heroine is a regular masturbator and her elderly homosexual friend, in his wisdom, tells us his main regret in life was not, ahem, %^&$ing more when he was younger. You might say, “that’s odd, male homosexuals typically do a ton of that—much more than straights.” Indeed, but you see this is 1962 when homosexuality was cruelly forced to stay in the closet by the cis white hetero patriarchy. Pity the man’s wasted youth without massive amounts of degraded, unnatural fornication, dear viewer. At one point he, misreading a situation, makes a pass at an unsuspecting heterosexual male waiter who is offended and asks him to leave the restaurant. Del Toro, not wanting you to miss how evil the homophobic bastard was, has two black customers enter the restaurant at that exact moment whom he promptly kicks out too.

This parade of sterile outcasts (even Elisa’s black friend is in what appears to be a rather loveless and childless marriage—how could it be otherwise with a filthy man involved) is contrasted with Michael Shannon’s sadistic, Bible-quoting character who has an idyllic 1950s style suburban family with a wife and two kids. To drive home the contrast, he is shown having awkward (if presumably fertile) missionary-position sex with his wife…

The emotional centerpiece of the film is Elisa falling in love with the river creature and copulating with it. We can add bestiality to the list of peccadilloes for our merry band of outcasts…

We’re now at the point where even a rudimentary A.I. program could write a diversity-propaganda screenplay worthy of Oscar nomination.

This entry was posted in Film, Hollywood, Political Correctness. Bookmark the permalink.