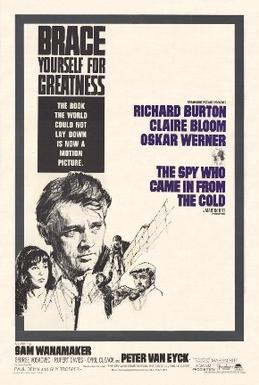 The Spy Who Came in From the Cold (1965) is director Martin Ritt’s beautifully shot, b/w adaptation of John Le Carre’s Cold War spy thriller. It features a terrific Richard Burton as Alec Leamas, a jaded, alcoholic MI6 double agent ultimately working for the British. Oskar Werner is very good as Fiedler, a zealous (almost puritanical), Jewish, communist agent working for Moscow who believes he is facilitating a genuine defection to the East by Leamas. Claire Bloom plays Nan Perry, a naive British Communist whom Leamas uses as part of his mission to ‘defect’ to the Eastern bloc, but with whom he ultimately falls in love with, against his ‘better judgment’. (Leamas is portrayed as a perpetual loner. “I have no friends,” he says at one point in the film.)

Le Carre’s novels often have clever symbolism within prosaic dialogue or events. There is some interesting and mainly indirect commentary on Jewish radicalism within this film. For instance, Wikipedia notes:

“One exception [from the novel] is that the name of the principal female character in the novel, Liz Gold, is changed to Nan Perry in the film, reputedly because the producers were worried about the potential confusion in the media with Burton’s then wife, Elizabeth Taylor.”

Given that the Liz Gold / Nan Perry character is a young, idealistic, British Communist, ideologically committed to Stalin’s Soviet Union, I would contend that the name change was to remove the character’s Jewishness.

Fiedler’s a Jew, of course, and Mundt’s quite the other thing. Believe me, my dear Alec, Fiedler is the acolyte who one day will stab the high priest in the back.

Later, towards the end of the film, Leamas tells Liz/Nan:

We’re witnessing the lousy end to a filthy, lousy operation to save Mundt’s skin… to save him from a clever little Jew in Mundt’s own department… who had begun to suspect the truth. London made us kill him… kill the Jew. Now you know.

Within this same conversation is a great bit of dialogue from the world-weary Leamas to the naïve and idealistic Liz/Nan, which obliquely condemns totalizing ideologies and idealist moralizing, whether religious or secular:

“What the hell do you think spies are? Moral philosophers measuring everything they do against the word of God or Karl Marx? They’re not. They’re just a bunch of seedy squalid bastards like me, little men, drunkards, queers, henpecked husbands, civil servants playing “Cowboys and Indians” to brighten their rotten little lives. Do you think they sit like monks in a cell, balancing right against wrong? Yesterday I would have killed Mundt because I thought him evil and an enemy. But not today. Today he is evil and my friend.”

The ending of the film is quite powerful and unexpected, with Leamas’ final act signifying a quixotic gesture against the nihilism his life has become.