Some of the nastiest people I have ever been with. (Trump supporters). We have their hate and rage on tape. Others around them were embarrassed for them. It was scary and sad.

On the positive side, I spoke with Ben Carsons wife and had a great conversation. She is a good woman.

Met with many Rubio supporters. I think changed some minds others no. But all good people.

All candidates have someone speak for them at the caucus. In the middle of my speech Trump walked in.

Thank God, I was just saying “Don’t give in to hatred and rage. America is great because America is good. Anyone that plays to the worst part of us, your rage and anger is not helping us become good.”

I believe Trump, whether he knows it or not, is grooming brown shirts.

Don’t believe me, go to a caucus.

He is even smaller in person than I remember. I think it is simply what he says that make him appear that way.

Near the last minute of the video, Trump enters the room in the background. Cheers erupt, most of Beck’s audience rush over to Trump, leaving Beck speaking to the backs of his remaining audience.

Beck then quickly finishes up his speech and basically high-tails out of there.

On his radio show tomorrow morning, will Beck assert that his “Don’t give in to hatred and rage” line — occurring precisely as Der Trumpenfuhrer entered the room — is another sign from God? 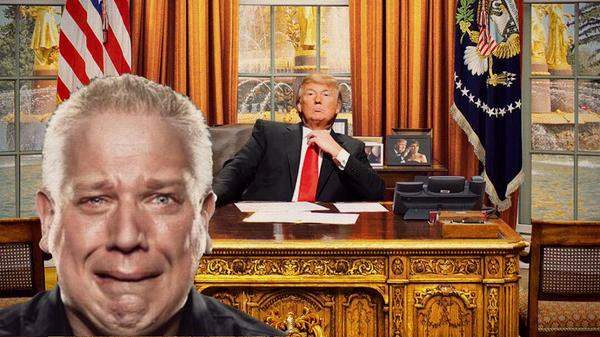