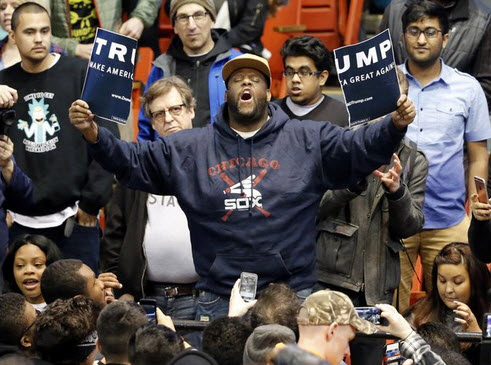 Whether intentionally or unintentionally, canceling Chicago was a brilliant strategic move on Trump’s part. In letting the Leftist Coalition feel emboldened, feeling that they caused Trump’s rally to be cancelled, Trump has ensured that this Leftist Coalition will show up in even greater force and bravado at some next scheduled Trump rally, most likely in some other big city with a large college campus population.

Before this future rally, of course, Trump supporters watching all this on television are no doubt getting more riled up, indignant… and focused.

Trump has brilliantly engineered here a physical embodiment of the Culture Wars writ large, moving it from the plain of the Abstract to the plane of the Concrete. The clash in Chicago is a natural midway point in the telos of our increasingly polarized and racialized culture war.

On the other side: a largely white demographic of all ages, a silent majority that is now becoming an Awakened Giant.

This entry was posted in Alt-Right, Culture Wars, Republican Party. Bookmark the permalink.