I have been contending for some time that Trump’s rise has more to do with the overreaches of Political Correctness than on his #1 policy issue: illegal immigration.

Political Correctness is the festering cancer that stifles debate on a series of important issues. For example, because of P.C., one half of the country is not allowed to articulate non-liberal positions on the following hot button issues:

I’m sure I’m forgetting some other issues.

While the Dems increasingly pander to the totalitarian whims of SJWs (“Oscars too white!”, etc), Trump’s rise is likely highly correlated with the excesses and overreaches of P.C.. We may be witnessing a historic moment when the P.C. balloon has finally popped, just like the housing market in ’07.

From a YouGov poll seeking to explain Trump’s appeal:

What separates Trump voters from those supporting other candidates is the importance of the issue of immigration.  While Republican voters generally think the economy is the country’s most important issue, no matter whether they are for or against Trump, Trump’s supporters are nearly five times as likely as supporters of other candidates to say immigration is the issue that matters most to them.   But Trump’s brashness may be more important than his issue positions.  The most important reason people support Trump, chosen by both Trump supporters and opponents in the party, is that he is not politically correct.

However, one in five Republican supporters and opponents think none of the options offered explains support for Trump.  As for their personal support, shaking up politics is most important for Trump voters; policy proposals and honesty matter most to supporters of the other three. 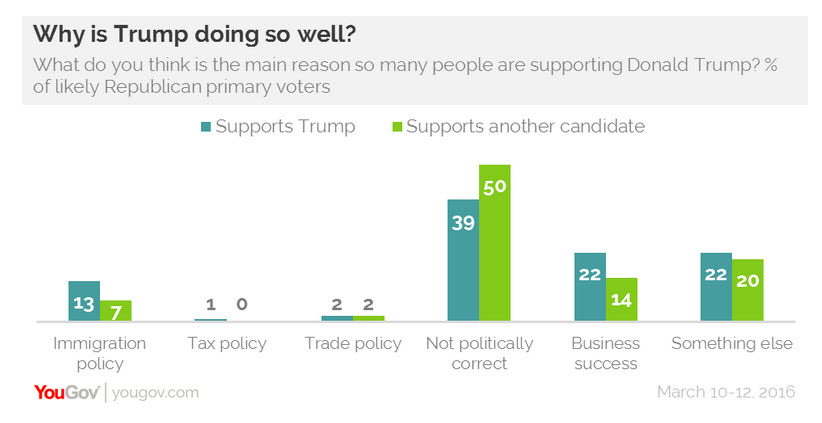 This entry was posted in Political Correctness, Republican Party. Bookmark the permalink.