Every once in a while, usually only once something has become so obvious as to be premises in others’ arguments, the NYT lets one in the door. In “Danes Rethink a Welfare State Ample to a Fault“, reporter Suzanne Daley actually investigates the thesis that Denmark’s generous welfare system might actually be undermining the country’s waning,  Protestant-based, work ethic.

The story starts off with a telling anecdote, one we could never imagine taking place in the U.S. (as pols like Chuck Schumer & Elizabeth Warren are solidly in-touch with ‘da streets):

COPENHAGEN — It began as a stunt intended to prove that hardship and poverty still existed in this small, wealthy country, but it backfired badly. Visit a single mother of two on welfare, a liberal member of Parliament goaded a skeptical political opponent, see for yourself how hard it is.

It turned out, however, that life on welfare was not so hard. The 36-year-old single mother, given the pseudonym “Carina” in the news media, had more money to spend than many of the country’s full-time workers. All told, she was getting about $2,700 a month, and she had been on welfare since she was 16.

The size, scope, generosity, and tax burden of Denmark’s giant welfare state is truly mind-boggling, as is the price tag (e.g., a 56.5% tax on incomes greater than $80,000, etc.) As the percentage of of working individuals to non-working individuals in Denmark shrinks, people (aka NYT reporters on holiday) are beginning to discover the generational effects of post-60s entitlement madness:

“In the past, people never asked for help unless they needed it,” said Karen Haekkerup, the minister of social affairs and integration, who has been outspoken on the subject. “My grandmother was offered a pension and she was offended. She did not need it.

“But now people do not have that mentality. They think of these benefits as their rights. The rights have just expanded and expanded. And it has brought us a good quality of life. But now we need to go back to the rights and the duties. We all have to contribute.”

The story is accompanied by this photo, with the caption: “Robert Nielsen, 45, said proudly last year that he had basically been on welfare since 2001.” 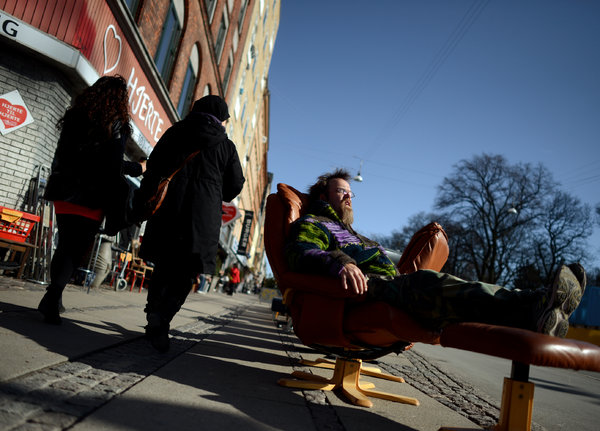 Mr. Nielsen said he was able-bodied but had no intention of taking a demeaning job, like working at a fast-food restaurant. He made do quite well on welfare, he said. He even owns his own co-op apartment… “Luckily, I am born and live in Denmark, where the government is willing to support my life,” he said.”

The article concludes with a distillation of the rationality (in the strictly economic and amoral sense of the word) such free-riding behavior has become, in a society largely devoid of negative reinforcers (e.g., the disappearance of stigma, the re-orientation of welfare as a ‘right’, etc.):

Some Danes say the existence of people like Carina and Mr. Nielsen comes as no surprise. Lene Malmberg, who lives in Odsherred and works part time as a secretary despite a serious brain injury that has affected her short-term memory, said the Carina story was not news to her. At one point, she said, before her accident when she worked full time, her sister was receiving benefits and getting more money than she was.

This entry was posted in Cultural Marxism, International. Bookmark the permalink.