Writing in the liberal Village Voice (“The White Man March, Which Is Almost Exactly What It Sounds Like, Is Coming to New York“), Anna Merlan provides a smarmy report on a white identity march. (Sigh… Why is every instantiation of white identity activism equated with ‘white supremacism’?)

This coming Saturday, March 15, in a bunch of cities worldwide, disgruntled white supremacists will take to the streets, bearing banners that read “DIVERSITY” = WHITE GENOCIDE in very big red letters. The White Man March aims to be a large display of “coordinated pro-white activity,” timed to coincide with St. Patrick’s Day and meant to express these white folks’ displeasure with how “white countries” are being over-run with, you know, non-whites and Jews and such.

There’s only one hitch. The organizer of the White Man March is Kyle Hunt, a 30-year-old guy who hails from a very small town in Massachusetts, near Cape Cod. Hunt understands that in the United States, white nationalists don’t really have the numbers to pull off an impressive-looking march. Past white supremacist protests have ended up, in his words, “looking like a circus.” He’s also fearful that the police or “anti-fascist” protesters might show up to try to disrupt the WMM festivities. So in New York and other big U.S. cities, the White Man Marchers are planning a very quiet flash mob, which they hope none of us will hear about ahead of time.

Hunt is one of the hosts of Renegade Broadcasting, an online radio station for people who are concerned with the “destruction of the white race.” A graduate of Amherst College with a double major in psychology and theater and dance, Hunt hails originally from Mashpee, Massachusetts and claims to have worked as a recruiter for Google and founded several start-ups in Silicon Valley before moving back to the East Coast and going white power full-time. He goes by “Kaiser Kyle” on YouTube and “Nyte Hulk” on Alternative Social, a pro-white answer to MySpace that he founded a few years back.

Heartened by what he sees as the advancement of the “pro-white” philosophy through the internet, Hunt decided a few months ago that it’s time to take his message offline. That message is, in a nutshell, that white people are being “mocked, displaced and violently attacked” through an insidious liberal idea known as “diversity.”

One commenter to the Village Voice piece astutely writes:

Anti-racist is a code word for anti-White. 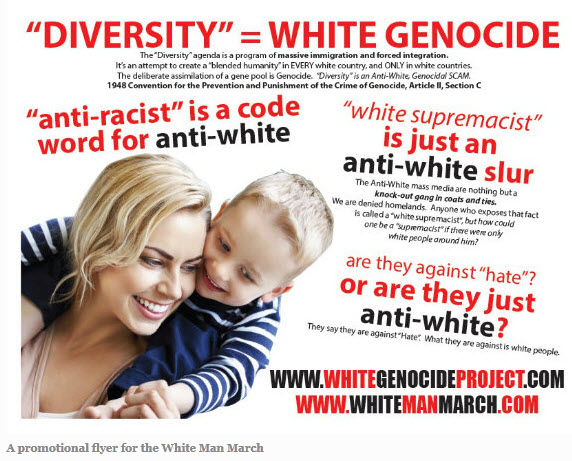