A Brief Defense of Memes

If a photo is worth a thousand words, then a well-constructed, counter-signal meme is worth at least that much.

In “A Quick Defense of Memetics”, August Rush writes:

For those of us who prefer the written word, it’s easy to dismiss the prolific usage & application of memes as “childish” or “low-brow”. However, there are many benefits to the tactics that the broader Alt-Right have adopted in directly engaging both the elites & the public with a mix of rhetoric and memes. In demotic systems, when engaging in meta-politics in order to change the nature of the broader culture, I believe that memes are a more effective form of propaganda than articles, position papers, and treatises…

The effort required to write a refutation of a leftist narrative is often substantially higher than the effort required to photoshop a simple meme which accomplishes a similar effect. For example, “Counter Signal Memes for Fashy Goys” uses crudely drawn MS Paint memes, mockery, and exaggeration to great effect on many leftist narratives. The subversive effect of humor has been well-known for years now, but that had primarily been the domain of the Left. Jon Stewart, Stephen Colbert, et. al., used mockery & humor in targeting their ideological enemies, and were wildly successful in doing so. Counter Signal Memes for Fashy Goys has internalized this lesson, and the juxtaposition of the crude drawings, exaggerated features, and mockery & derision at an obviously flawed, but deeply held Leftist belief, forces one to laugh at the absurdity of the position being mocked. They’re very effective at deconstructing standard Leftist narratives.

Thus, from a standpoint of effectiveness per unit of effort, memes are where one should put the bulk of their effort when trying to reach those who occupy the persuadable center. That is not to say that the intellectual side of an ideological war isn’t necessary nor useful, as some people (particularly individuals with higher IQ) definitely respond more to dialectical methods than rhetorical methods, and any movement needs intellectual weight to convince and persuade those elites who might be brought into the fold. But, if your target is mass dissemination & persuasion, with the purpose of maximizing your effectiveness per unit of effort in the process of content creation, I think that memes provide the greatest return on investment for the budding propagandist.

The article is accompanied by this wonderful graphic representation of Plato’s Cave in the age of contemporary Alt-Right Red-Pilling. 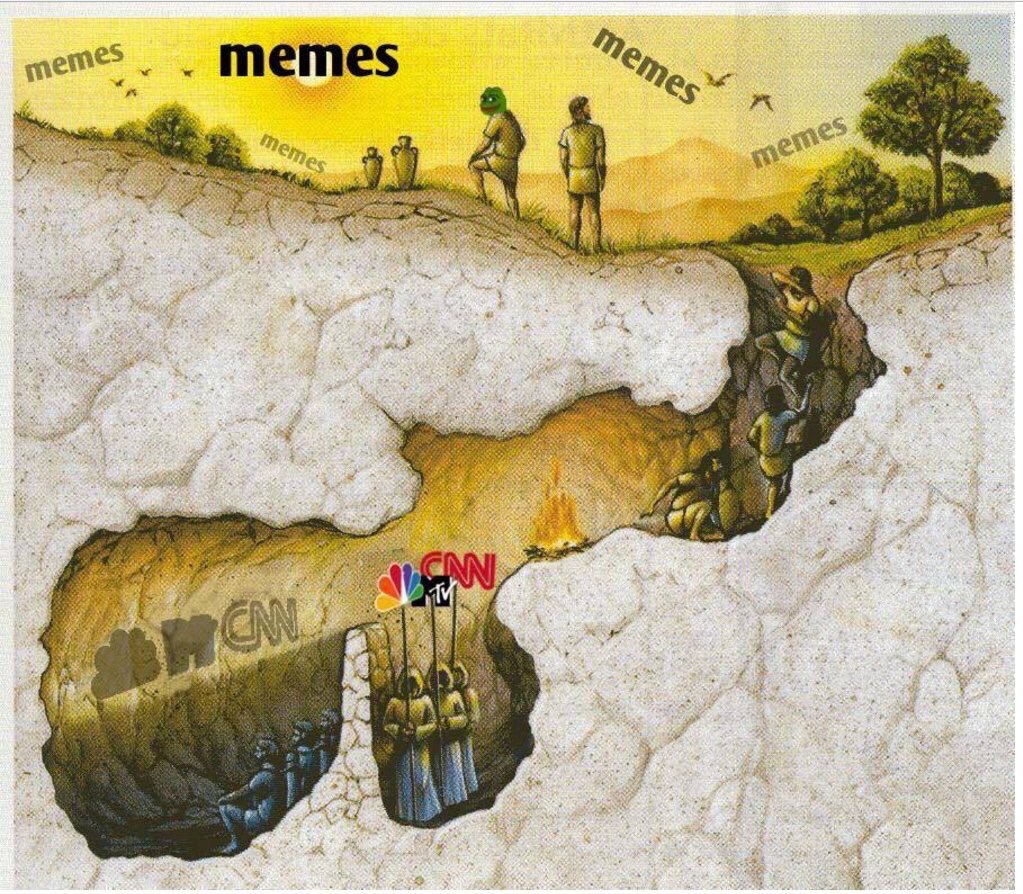