In case you were wondering… 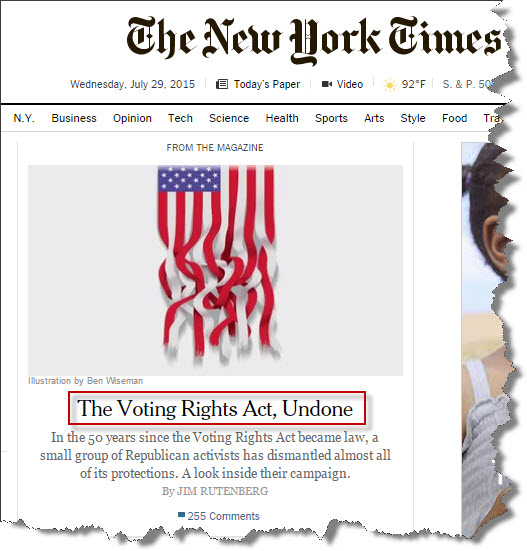 The shredded American flag is a nice touch. Do they teach that sort of thing at the Columbia School of Journalism?

The title of the NYT piece, I should add, is “A Dream Undone“.

I wonder what the political slant on the subject might be here?

Keep in mind, this is being presented as news, not as an editorial.

Oh, and this is the first of what will be an extended series called “Disenfranchised”. A sidenote to the piece reads: “This article is the first in a series examining the ongoing effort to roll back the protections of the Voting Rights Act.”

The NYT piece, written by Jim Rutenberg (ahem), first heralds the glory days that lasted right up to 2008:

In the decades that followed, Frye and hundreds of other new black legislators built on the promise of the Voting Rights Act, not just easing access to the ballot but finding ways to actively encourage voting, with new state laws allowing people to register at the Department of Motor Vehicles and public-assistance offices; to register and vote on the same day; to have ballots count even when filed in the wrong precinct; to vote by mail; and, perhaps most significant, to vote weeks before Election Day. All of those advances were protected by the Voting Rights Act, and they helped black registration increase steadily. In 2008, for the first time, black turnout was nearly equal to white turnout, and Barack Obama was elected the nation’s first black president.

Cue the dramatic music, however, as Rutenberg then turns to the evil GOP forces of today:

Since then, however, the legal trend has abruptly reversed. In 2010, Republicans flipped control of 11 state legislatures and, raising the specter of voter fraud, began undoing much of the work of Frye and subsequent generations of state legislators. They rolled back early voting, eliminated same-day registration, disqualified ballots filed outside home precincts and created new demands for photo ID at polling places. In 2013, the Supreme Court, in the case of Shelby County v. Holder, directly countermanded the Section 5 authority of the Justice Department to dispute any of these changes in the states Section 5 covered. Chief Justice John Roberts Jr., writing for the majority, declared that the Voting Rights Act had done its job, and it was time to move on.

There’s no discussion in Rutenberg’s piece on whether the ‘specter’ of voter fraud is, in fact, a genuine empirical phenomenon, other than to say no evidence exists. Short of objective discussion of this non-trivial matter, GOP efforts for ‘Voter ID’ laws are without context and are bizarrely construed as attempts to ‘inhibit’ blacks from voting.

Actually, the most important requirement of the Voting Rights Act has always been its prohibition of denying anyone the right to vote because of race, and in recent years there has never been any significant movement — Republican or otherwise — to the contrary. Republicans were instrumental in passing the original act (voting for it, as I recall, in higher proportions in both houses of Congress than did Democrats).

Subsequent disputes over the act have involved only the use of the “disparate impact” approach to its enforcement, and whether one section of the act — involving “preclearance” of state and local voting changes by the federal government — is any longer justified. There’s nothing sinister in the conservative positions here. The race-based decision-making encouraged by the former is bad for any number of reasons, and actually encourages the racial segregation of voting districts, which is quite at odds with the ideals of the civil-rights movement. As to the latter, the Supreme Court was quite right to rule two years ago that, indeed, the preclearance formula of Section 5 can no longer be justified

From a previous Clegg column:

Section 5 was an extraordinary provision. It said that nine entire states and parts of seven others could not make any change — no matter how small — in any voting practice or procedure without getting advance permission from the federal government. The federal government had to be convinced ahead of time that the change had no discriminatory “purpose” or “effect.” It basically put the burden of proof on a state or local government to establish its innocence — not only of disparate treatment, but also of anything with a disproportionate racial impact.

Heritage has a good series of bullet points on the matter.