It appears St. Abraham Lincoln read an interesting-sounding book which, naturally, I have never heard of. (Thank you, cumulative-effect-of-bell-curve-median-historians!):

It was an inscription which confounded Illinois librarians for years.

On the inside cover of a ‘scientific’ book justifying racism was a note believed to be penned by the US President who ended slavery, Abraham Lincoln.

Now historians have confirmed the Great Emancipator read ‘Types of Mankind’ [Ed: written by Samuel George Morton and published in 1864]… to better educate himself about his opponents’ line of thinking…

The 700-page book, published in 1854, extolled the ‘scientific’ theory that different races were created at different times and thus could not be equal…

According to Pantagram[sic], Lincoln had borrowed the book from attorney Clifton H. Moore, his friend.

Lincoln allegedly wrote the note in 1861 so the book would be returned to Moore, its rightful owner.

Pantagram theorized that Moore lent Lincoln the book to assist Lincoln with a legal case.

Lincoln reportedly had a client at DeWitt County, Bill Dungey, whose brother-in-law called him ‘a negro’ and ‘Black Bill’ to people in town because of his dark skin.

Dungey explained that he was part Portuguese and sued for libel because being classed as a black man would undermine his marriage to the accuser’s sister.

Here’s a page from Morton’s book: 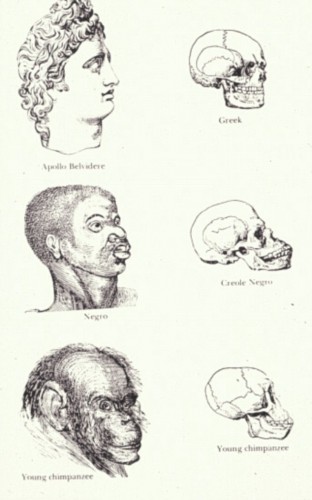 This entry was posted in History, Race. Bookmark the permalink.