With just weeks before the new Rutherford B. Gaston Middle School opens in southwest Fresno, community and church leaders are calling on Fresno Unified School District to reconsider its hiring of a white teacher to instruct African-American, Latino and Southeast Asian studies there.

At an early morning news conference Monday, a small group of concerned citizens led by Rev. Karen Crozier met in front of the school on Church Avenue and Martin Luther King Jr. Boulevard.

People at the gathering said the new school, which is the first southwest Fresno middle school in decades, needs teachers who reflect the ethnic and racial background of its students.

Crozier and others were dismayed to learn the person hired to teach the school’s three cultural studies classes is white. District officials initially considered hiring a teacher of color, she said, but ultimately hired Peter Beck, a former teacher at Hoover High School.

“We’re just saying what the community wants. We didn’t fight for a white male or female teacher to educate our babies,” Crozier said. “We still are at these racial fault lines, and we want someone who will be able to think critically about those racial fault lines and how do we help heal, to restore the problems that have existed.” 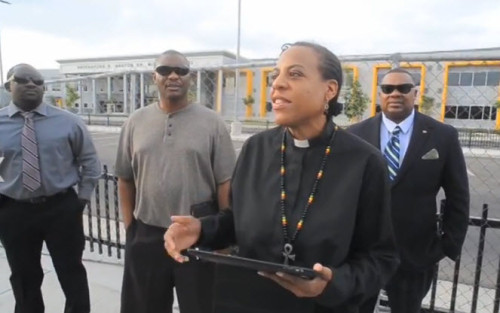 The white teacher in question, whose name is (ironically) Beck, seems like a perfectly capable leftist, well-versed in the indoctrinating political correctness of ‘Ethnic Studies’. Notes a School District spokesperson:

Fink, a 2002 Hoover High graduate who is Hispanic, said she remembers Beck’s enthusiasm and inspiring teaching style from taking his Chicano studies and Mexican history class. He’d frequently bring in speakers, write quotes and statistics on the whiteboard about Hispanic youth and organize culturally sensitive projects on traditional Mexican holidays.

Golden didn’t directly answer questions about whether the district made any efforts to hire teachers from ethnic or racial minority backgrounds, but said job candidates are evaluated based on their experience, certifications and education.

District Trustee Cal Johnson, who represents the southwest Fresno community and was not involved in the hiring process, said he supports Beck for the position.

“I do not believe colorism trumps qualifications,” he said. “I don’t care whether it’s white, whether it’s black, brown or yellow.”

My favorite paragraph in the piece, though, has got to be this one:

Rev. Paul McCoy of New Light for New Life Church of God said he met Beck this month at a meeting with one of Gaston’s principals and found him “highly intelligent.” He’s qualified for the job, McCoy added, but said, “we told him it’s not about him.”

This entry was posted in Cultural Marxism, Identity Politics. Bookmark the permalink.