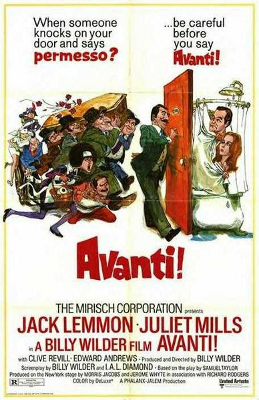 This vastly underrated comedy directed by Billy Wilder stars Jack Lemmon, Juliet Mills, and the criminally underrated British actor Clive Revill, who is a comic revelation (his comic timing is absolutely perfect) as Italian hotel manager Carlo Carlucci. The supporting cast is terrific, especially Gianfranco Barra as Bruno, the valet who desperately wants to get to America, and Edward Andrews in a small but hilarious role as a swinging-dick, conservative State Dept official.

Based on a 1968 play by Samuel A. Taylor, and with a script co-written by Wilder and longtime script partner I.A.L. Diamond, dialogue was tailored to Jack Lemmon, who is at the height of his comedic powers in this movie, playing the son of a recently deceased corporate magnate who has traveled to Italy to claim his father’s body, and is rushing to get back in time for a high-profile funeral already scheduled in the U.S. He soon learns that his father did not die in his traffic accident alone, but a woman he’d been having a passionate, 10 year-long affair with died with him as his passenger. Juliet Mills plays wonderfully a carefree British woman of very modest means, who has similarly come to claim her mother’s body, her mother having been the mistress of Lemmon’s father. Through a series of farcical misfortunes, and the classic situational comedy that Wilder excels at, Lemmon & Mills are drawn together.

Wilder wanted to make a film “a little like Brief Encounter, which I always admired,” but the comedic element supersedes the romantic. Mills agreed to gain twenty-five pounds for her role, and a couple of scenes involving explicit nudity (breasts and buttocks, not the other bits), at first seem out-of-place, but ultimately resonate satisfactorily given the associated existential sub-theme of mortality and physical imperfection.

The movie has great poignancy today, with anti-Nixon, political jokes that — while being topical — still have relevancy today, as well as a subplot involving the theme of people desperately wanting to immigrate to America. The movie is chock full of hilarious Italian stereotypes and pokes fun at Italian inefficiency, bureaucracy, and the norm of 3-hour lunches during the work week.

After viewing a number of Italian films, Wilder selected Luigi Kuveiller as his cinematographer, which was a superb choice. Avanti! is beautifully shot on the islands of Ischia and Capri, and along the spectacular Amalfi Coast. Both exteriors and interiors pop with a vibrant color that are masterful in their composition.

Upon its release, the film’s stars were rightfully hailed (Lemmon, Mills, and Revill were all nominated for Golden Globes for their performances here), but reviews were mixed. Some critics felt Wilder was floundering here, trying to stay hip with post-60s, Euro-cinema nudity and sex, but the the script makes some veiled self-referentiality on this. Wilder himself expressed disappointment with the end product, having wished the comedy to be secondary to the romance. Some also found Avanti! to be 30 minutes too long (it stands at 140 minutes), and while I agree that some scenes could have been trimmed or excised altogether, the movie’s length is a minor critique for what is otherwise a hidden masterpiece.