Normism: The Philosophy of Norm Macdonald

Normism: The Philosophy of Norm Macdonald, a short book I wrote about a great comedian, is now available on Amazon.

Norm Macdonald’s philosophy of life, comedy, and death is sketched out thematically from his original material, as well as from extant interviews with him and profiles of him over the years.

Among his fellow comedians, Norm Macdonald was widely hailed as one of the funniest men alive, a DGAF Mark Twain whose unique combination of cadence, persona, material, and delivery left a cultural impact that greatly outsized the limited commercial success he experienced. To his fans, Norm’s everyman persona engendered a sense of relatability and connection.

But there were aspects of his life not well known. He was a child prodigy who graduated high school at the age of 14. His experiences with cancer since his youth led to a lifelong existential obsession with death, which was also the dominant theme of his comedy throughout his career. In the last decades of his life, he led a notably ascetic lifestyle and was largely unconcerned with achieving breakout success.

For comedic effect, early on his career Macdonald carefully crafted a ‘dumb guy’ persona, but there was a trickster element to this. Largely hidden from public view was his Christianity, his cultural conservatism, and how well-read he was in literature, philosophy, and theology, all of which he would subtly weave into his material. From a position of anti-intellectualism, he played the Philosopher-Fool. Through both his original works and the various interviews he did over the years, Macdonald would touch upon subjects ranging from the nature of comedy, to culture, politics, and religion, to his all-consuming fear of death.

More than just a comedian telling jokes, Macdonald embodied his material — the comedy and comedian were one and the same.

‘Normism’ was his philosophy, his way of being. 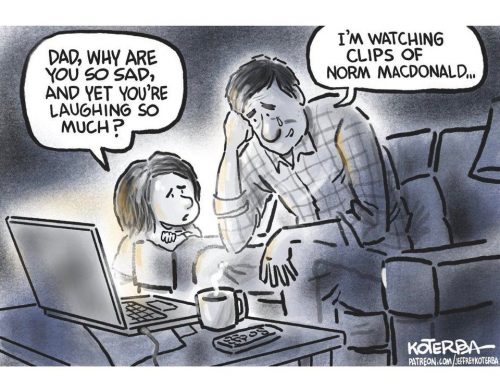 This entry was posted in Culture, Humor. Bookmark the permalink.