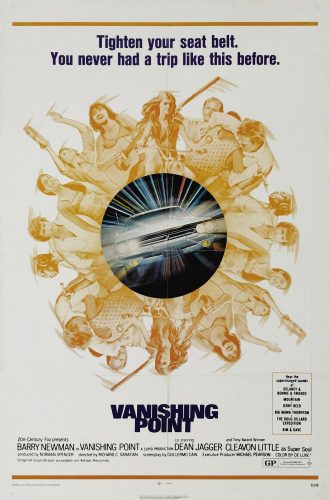 This movie is a f*cking revelation. A cult fave, I was expecting a more conventional muscle car movie, but this is so much more. Directed by the underrated Richard Sarafian, with stunning cinematography by John Alonzo. A mythopoetic road movie + existentialism + knockout performances from everyone, especially from the lead actor, the equally underrated Barry Newman who plays ‘Kowalski’, the guy the police are chasing and who challenges authority and all around him in his souped-up Dodge Challenger. He downs a supply of amphetamines to reach his Sisyphean goal of driving from Denver to SF in record time, for an unspecified goal. All the secondary actors are top-notch. Though countercultural ala Easy Rider, it is incredibly based and salient for the New Right of today, who are today’s counterculture.

The layers of symbolism and allegory here are many. Though he doesn’t show it, Kowalski is damaged goods. He served with distinction in Vietnam. He became a cop but left that role after acting against police corruption. He then became a race car driver, but saw some die in wrecks and nearly died himself. And he is haunted by memories of his lost surfer girlfriend. For the most part, he refrains from the temptations of pot, ‘free love’, and whatnot for a higher purpose… getting to SF in record time, but does succumb to a desert seduction by a young hitchhiker (Charlotte Rampling) who, in her downhearted musings about waiting and eternity, may represent death itself.

In getting the car he’s driving to SF, we never learn why it is so urgent to get it there in record time, and it seems that Kowalski’s urgency is a purpose-in-itself, where the ultimate telos of one’s ‘vanishing point’ – the eyes fixed as far as one can see down the road — is the annihilation of being which comes with death.

The fantastic era-specific soundtrack, with its evangelical rock tinge (which serves as meta-commentary on the film’s proceedings), accentuates the Christ allegory of the protagonist. In the third act, Kowalski is aided by a guardian angel of sorts, a blonde hippie biker dude named ‘Angel’, who lives in a trailer in the middle of the desert with his gorgeous blonde girlfriend (who herself rides around the house naked on a motorcycle).

The role of the desert is central throughout. The sequence where, in the middle of Death Valley, Kowalski (fixing a flat tire) is stumbled upon by an old man snake collector, is like something out of the Bible. While the movie leans to the left for the time, by today’s standards this is less apparent. For example, on a lone stretch of desert highway, Kowalski picks up two gay hitchhikers whose car had broken down (one is carrying a “just married” sign that was on the back of their car), but this humorous interlude soon turns dangerous when they pull a gun on Kowalski to rob him. He bests them in the end though.

George Miller must have been greatly influenced by this movie when making Mad Max. From the centrality of desert highway, to the highway chase sequences, to the similarity in names between Kowalski, Max Balchowsky (the ex race car driver who maintained the five 1970 Dodge Challenger R/Ts used during filming), and Max Rockatansky, the name of Mel Gibson’s character in Mad Max.

If you haven’t seen this movie, do check it out. It’s achieved cult status for very good reasons. The cinematography is sharp, wide, and spectacular. The car driving is top-notch. And the deeper allegorical levels of the film will pull you in.