When I learned that this new 6-episode spy series on Apple TV – of which the first two episodes have aired — starred Gary Oldman, as well as Jonathan Pryce and Kristin Scott Thomas, I was in. Based on the 2010 novel by Mick Herron, Slow Horses is a spy thriller in the understated, mundane, John Le Carre mode rather than the over-the-top James Bond mode. Adapted from the novel by Will Smith (The Thick of It; Veep), the show follows the goings-on at ‘Slough House’, a dumpy administrative place-of-demotion (resembling the worse precinct police station one can imagine) for spycraft misfits who have made career-ending mistakes. Their miserable boss, Jackson Lamb (Gary Oldman), is intent on making each and every one of them quit from drudgery or boredom. 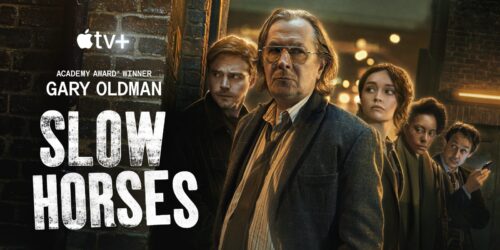 E01 begins promising enough, with the show’s premise launched, and various characters introduced, but by the end of E02, insufferable wokeness rears its ugly and ubiquitous head. The antagonists of the show’s heroes are shaping up to be various “right-wing” and/or “fascist” individuals. Every character in the spy agency voices their unanimous contempt of a conservative, immigration-restrictionist politician who simply expresses his wish to “keep Britian British”, a sentiment that the characters all find odious. A ‘disgraced rightwing journalist’ (who an MI5 agent has been tasked with spying on) is depicted as a mean, ugly, wiry man who has never tipped at the small Greek eatery he’s been going to for 5 years (says the restaurant’s owner). Just so we get the idea that he’s a bad person.

He’s been ‘disgraced’ and unemployed apparently for having contributed to a fictional UKIP or English Defense League-type group, whose “Keep Britain British” mission statement is #LiterallyHitler. A former high-level MI5 employee (Jonathan Pryce) justifies the doxing of this journalist and other individuals (via orchestrated MI5 leaks), saying something to the effect of “We can’t have these fascists walking around openly in our midst.”

Plotwise, the nefarious terrorist incident that is captivating the nation involves… get ready for it…. white skinheads (at least one of which we can infer is an active policeman) kidnapping a young Muslim Paki (who’s a business student at university!) and promising to behead him on camera because, presumably, they want to “Keep Britain British”. We get lots of sequences of the skinheads being mean and cruel to the crying, terrified Vibrantly Diverse One who is tied to a chair in a dingy townhouse basement somewhere in London.

The cold female MI5 higher-up (Kristin Scott Thomas), who humiliates/emasculates various men underneath her (basically telling one “don’t speak unless your spoken to”) lectures some colleagues that MI5 has been so preoccupied with Muslim domestic terrorism that they’ve ignored white supremacist domestic terrorism. Just like in real life!

And, of course, by the end of E02 there is an office romance miscegenation in the works. (Yes, there’s even a black MI5 misfit… Wait, is that progressive casting or racist ‘incompetent blacks’ casting?)

I’m not sure I’m going to stick it out with this one. I may, if only to see more of Oldman, who embodies his role with relish. His Jackson Lamb character is a severely unkempt (e.g., holes in his socks, often on display), foul-mouthed alcoholic, who sleeps at his desk, in between ashtray-overflowing, chain smoking marathons. I imagine we’ll eventually find out what led Lamb to be sent to Slough House himself.