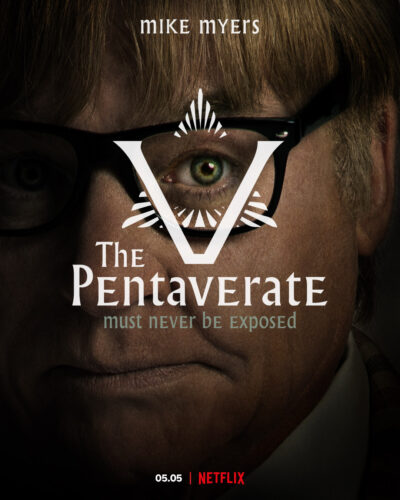 I used to love Mike Myers’ movies: the Austin Powers franchise, So I Married an Axe Murderer, etc. But something happened to him after the critical panning of his last comedic film The Love Guru (2008), which was 14 years ago. It appears a deep introspection followed. Mike Myers got way more serious (with small roles in more serious films) and, unfortunately, as we see in this really bad and embarrassingly unfunny 6-episode Netflix series… he became woke.

My first clue that this was going to be bad was by via the simple fact that I had to search for it on Netflix. One would expect that a new and rare Mike Myers project would be featured prominently on the main Netflix page, but nada. Red flag #1.

Then I saw how The Pentaverate has a 33% critic score on RT, which is generous to say the least. Red flag #2.

Then I read a Hollywood Reporter interview with Myers where he extolls the virtues of The Obamas™ and warns us that “Right now, in the global war between fascism and democracy, the first casualty of war is truth.” Throughout the series, there are lots of nods to Kubrick (whom Myers worships), including the conspiracy theory that he was involved with the U.S. moon landing ‘hoax’, the ‘eye in triangle’ of A Clockwork Orange, HAL from 2001, and the creepy piano motif from Eyes Wide Shut.

Qua past Myers, the series is chock full of his usual over-the-top Britcom scatology, except that none of it is funny. I hate to say it but it is cringeworthily juvenile and facile, and in a non-transgressive way, signaling that Myers has outlived his comedic usefulness. (I think I laughed maybe 3 times across all 6 episodes).

Even the members of The Pentaverate (a benevolent secret society that runs the world and holds Davos-like global meetings, etc.) are portrayed as Dumb White Guys whose time has passed:

Throughout the entire series, young Reilly wears a black T-shirt with white lettering that reads: “Canada: Living the American Dream violence-free since 1867”.

In the first 2 episodes, Keegan-Michael Key (of “Key & Peele”) plays a streetwise, jive-talkin’ Black Man recruited into The Pentaverate who is… drumroll… the world’s greatest nuclear physicist who is on the verge of solving cold fusion. Think Eddie Murphy from 48 Hours but also as the most brilliant scientific mind alive. (“Y’all know you kidnapped a black man!?”). Naturally, Myers checks off the miscegenation box with Key getting it on with the one Cishet White Woman in the series.

The series culminates in the benevolent Pentaverate members (sans the dastardly Rupert Murdoch member, who escapes for a sequel that will never be) agreeing to… and I’m not making this up… commit suicide in order to pave the way for what becomes The New Pentaverate: a group of progressive and smarter-than-the-white-guyz POCs and Women.

Just when you though Wokeness couldn’t possibly create any more droll and predictable activist programming, Mike Myers comes along with with his pick-axe to prove that the virtue-signaling of Hollywood’s most insulated celebs has no boundaries.