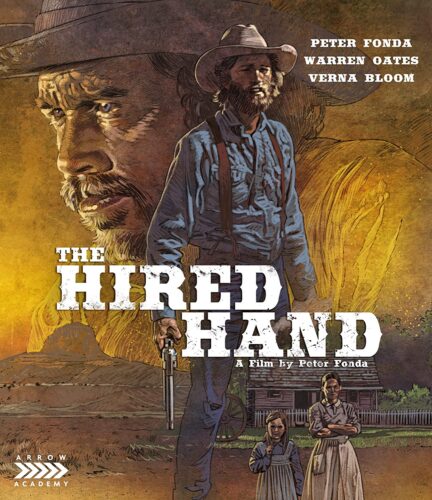 After the huge success of Easy Rider (1969), Universal Studios helped launch the brief New Hollywood phase of the industry by giving Peter Fonda $1,000,000 to make a movie (it is Fonda’s directorial debut), granting him full artistic control, as they had similarly done with Dennis Hopper, who would make the acid-drenched The Last Movie in the same year.

Fonda and a superb Warren Oates (Fonda gave up part of his producing fee to bring Oates aboard) play world-weary drifter cowhands at something of an impasse in life. Seven years prior, Fonda had left his wife and child for the ‘freedom’ of the open terrain of the American Southwest; he now longs to return home, unsure of how his wife will receive him but nonetheless determined to try. Although Oates would rather continue westward to California and the Pacific Ocean, he is game for returning to Fonda’s old homestead. (In many ways, Oates’ balanced and nuanced performance is the centerpiece of the film, the gravity upon which all events revolve around).

Verna Bloom plays Fonda’s forlorn wife, a woman hardened by loneliness and abandonment, yet still vulnerable and emotionally fragile in the presence of her husband… and Oates. She doesn’t initially accept Fonda back into her life in the role of traditional husband, but allows both he and Oates to stay on as ‘hired hands’. While Fonda plays a sort of aimless Odysseus returning home, Bloom is an all-too-human Penelope who, in the seven year interim, has both succumbed to various suitors’ advances and made her own advances to various cowhands she’s employed.

The screenplay by Scottish novelist Alan Sharp has some extraordinary dialogue, subtle and existential in the best of Western traditions. There is one scene between Bloom and Oates that is one of the most moving scenes I’ve ever seen in a movie.

The terrific cinematography is by the now-legendary Vilmos Zsigmond (McCabe and Mrs. Miller; Deliverance; The Long Goodbye; Close Encounters of the Third Kind; The Deer Hunter; Heaven’s Gate), but it is Frank Mazzola’s editing of Zsigmond’s footage that gives The Hired Hand such a unique feel. Moving images stop in freeze-frame and then dissolve into another, similarly-shaped still which then proceeds into new moving imagery, providing a poetic element to the visuals. This further coalesces vis-à-vis the haunting and atmospheric soundtrack self-recorded by Greenwich Village folk scene fixture Bruce Langhorne. Minimalist instrumental pieces involving banjo, sitar, and fiddle perfectly matches the film’s mood. The movie’s heralded, opening montage sequence – which consists of slow-motion footage of Oates bathing in a river while Fonda fishes – is a mini-masterpiece: the soft light and deliberate sunlight-infused lens refraction, the slow dissolves, and Langhorne’s simple banjo-centered melody collectively create a powerful and emotional backstory… without a single word. It is bookended by the film’s silent and very moving ending.

There is a sense of foreboding throughout the film, with incarnations of death (as well as unmitigated evil in nature) all around: a boy crying out for his mother as he lays dying; the corpse of a young drowned girl slowly cascading down a river. Christ symbolism (a widely-used trope in hippie films of the era) is present, but not in an overbearing way. The film’s longevity, however, is assured through its overarching thematic elements: With age comes the abandonment of youthful dreams and idealism (represented here through the discussions of California), the yearning to return ‘home’, the pragmatic acceptance of one’s limited lot in life and love, and the resignation that comes with seeing these truths.