Some shadow-dwellers emerged ‘from the shadows’ just long enough to protest on Capitol Hill.

Roughly 40 leaders and activists from immigration, union, and other advocacy groups were arrested in a sit-in protest that snarled traffic near the Capitol Thursday in a show of pressure on the GOP-led House to act on comprehensive immigration reform.

Among the activists arrested during the midday protest just outside the Cannon House Office Building were top officials from the AFL-CIO, the Campaign for Community Change, the Service Employees International Union, Communications Workers of America and the United Farm Workers…

In loud and sometimes hoarse voices, activists chanted “Undocumented, unafraid!” and “What do we want? Citizenship!” during the hour-long demonstration.

As one commenter astutely notes: Now that they’re here in colossal numbers they’re starting to get belligerent.

Here they are, being joined by Rep. Luis Gutierrez (D-Puerto Rico) and Rep. Raul Grijalva (D-Mexico): 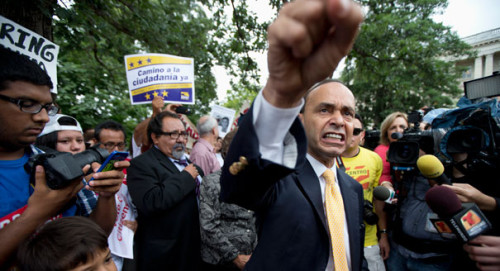 Given demographic realities, Raul Grijalva is the type of House Rep. we’ll be seeing more of in years to come:

Grijalva became a leader in such radical groups as the Chicano Liberation Committee, which confronted the administration of the University of Arizona with demands for the establishment of a Mexican-American Studies program and the recruitment of Chicano students and faculty.

He was also active in MEChA, Movimiento Estudiantil Chicano de Aztlan, the student group that called the Southwest “Aztlan,” the spiritual home of the Chicano people. The acronym, the Spanish word for “fuse,” was evocative of the group’s confrontational, nationalist ideology, which took its sharpest formulation in the group’s motto: “Por la raza todo, fuera de la raza nada’’ — “For the race, everything, outside the race, nothing.”..

Grijalva was so militant that he alienated some members of Tucson’s Mexican-American community. After losing in his first bid for elective office, a 1972 run for a seat on the school board, he began to cultivate a less radical image. Navarro writes that Grijalva “decided to dissociate himself from RUP [Raza Unida Party],’’ and adopted “a much more middle-of-the-road image and approach” that included outreach to non-Hispanics.