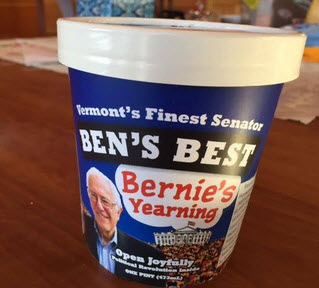 Ben Cohen, one of the co-founders of Ben & Jerry’s ice cream and a longtime Sanders supporter, has for months talked about making a special flavor for his home-state senator. Earlier this month, Cohen told MSNBC that he would call the ice cream “Bernie’s Yearning,” featuring a milk chocolate disk covering the top of plain mint ice cream. The disc is meant to represent “the huge majority of economic gains that have gone to the top 1% since the end of the recession. Beneath it, the rest of us,” reads the description on the back of the pint posted on the website.

I would have gone with “Bernie’s Matzo Surprise”: Chocolate-Covered Matzo lays hidden beneath a deep layer of white vanilla ice cream.