I haven’t been this excited for a movie since… I don’t know when.

Michael Keaton as ‘Birdman’… a not-altogether-hidden, nor irrelevant nod to Keaton’s Batman… and then a no longer hot commodity, practically disappearing from the big budget movie scene which he once dominated…

“A washed-up actor who once played an iconic superhero must overcome his ego and family trouble as he mounts a Broadway play in a bid to reclaim his past glory,” reads the IMDB storyline summary. 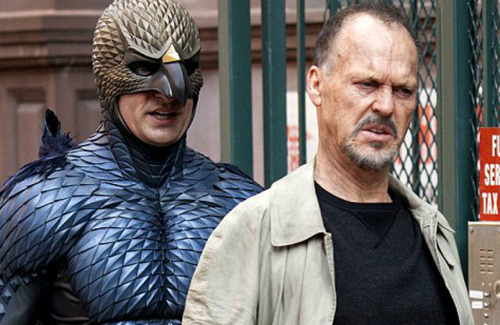 For sure, man, for sure.

That is likely the point.

And it’s something that all of us — in our more banal, pedestrian, and Prufrockian lives — can relate to.

Life, and the normative, self-imposed expectations which greatly shape our appraisals of life, are in many ways constructs of our own fragile egos. We are trapped by our own expectations, however rightly or wrongly such expectations arise. The magical realism that appears to be present in Birdman (at least through its trailers) is conveyed, so it seems, through the protagonist’s mental breakdown and its aftermath.

From the film’s trailers — and from the sustained meditations on the subject which a recent Charlie Rose segment emphasized [here’s a short clip from the segment], the film’s main contributors appear to be fully invested (in the philosophical sense) with the film’s trajectory.

It’s worth noting that the full title of the movie is Birdman (or The Unexpected Virtue of Ignorance), which it would seem highlights the moral and existential dimensions of the film, and while Birdman is, at one level, an ostensible take-down of Hollywood egos and pretensions, the film works (and can only work) if it speaks to the experiences of the average moviegoer… that is, the Everyman.

There seems to be a universality to Birdman, projected through the long, continuous takes… the ‘movie’ narrative which emanates from life’s inherent Steadicam lens (to quote Norton), and which propels the Walter Mitty-like imaginings that fire off in the distance or simply in our peripheral vision.

I look forward to seeing the film’s resolution, which I anticipate will be a thoughtful meditation on… life itself.

This entry was posted in Existentialism, Film. Bookmark the permalink.