Birth of a Nation: A ‘Public Menace’

Here’s another one I believe we can safely put under the JAPCAT phenomenon. Dorian Lynskey’s “A Public Menace” fits the profile, and has an eerie subtitle to boot: “How the fight to ban The Birth of a Nation shaped the nascent civil rights movement.”

In 1916 a 41-year-old man in Los Angeles published a short pamphlet called “The Rise and Fall of Free Speech in America.” In passionate if somewhat pompous tones, the author described motion pictures as “the laboring man’s university,” but warned that their power to educate and instruct the nation could be “muzzled by a petty and narrow-minded censorship” that would create “a sugar-coated, virtuously-garbed version … in order to satisfy the public mentors of our so-called morals.” He quoted dozens of journalists and politicians who opposed censorship, cited Shakespeare and the Bible for good measure, and protested that “this new art was seized by the powers of intolerance as an excuse for an assault on our liberties.”

That sounds pretty poignant, and more trenchant today than in 1916.

Who was this man of principle battling the political correctness of 1916?

The pamphlet’s author was the film director D.W. Griffith, and the subtext for his First Amendment flag-waving was the fierce campaign against his 1915 motion picture The Birth of a Nation. The longest and most expensive movie yet produced was an unprecedented box office phenomenon: Griffith biographer Richard Schickel estimates that by the end of 1917 it would gross $60 million, an unheard-of sum. But it was also hated like no picture before or since for its grotesque distortion of Reconstruction, in which black characters are sexual predators and vengeful thugs, former slave owners are persecuted victims, and members of the Ku Klux Klan are gallant saviors… 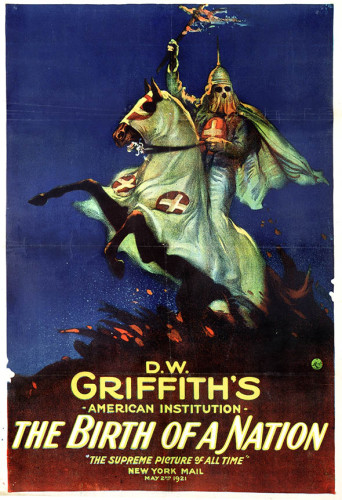 A century after its release… [f]ilm studies professors preface their lectures on the film with emphatic disclaimers about its politics, then teach it anyway because of its multiple breakthroughs in the use of editing, cinematography, and music. No serious critic would disagree with James Baldwin’s assertion in The Devil Finds Work that the film is both “one of the great classics of the American cinema” and “an elaborate justification for mass murder.” Like Triumph of the Will, it is a technical tour de force and a moral pariah, one that vividly illustrates the racist mindset: violent, paranoid, sexually neurotic, sentimental, and absurd.

Well, it didn’t take this article too long to meet the criteria of Godwin’s Law.

But only one argument—the one between the filmmakers and their opponents—has been settled by history. The rupture inside liberalism, about whether any work of art can be dangerous enough to merit suppression, has never been resolved. Some liberals believed that Birth’s distorted history had such menacing implications for black Americans that they forged awkward alliances of convenience with reactionary forces who wanted to manacle cinema itself. Meanwhile, free-speech hard-liners on the left loathed the picture and efforts to prohibit it in equal measure. In his authoritative history, D.W. Griffith’s The Birth of a Nation, Melvyn Stokes quotes Chicago journalist William L. Chenery: “Liberals are torn between two desires. They hate injustice to the negro and they hate a bureaucratic control of thought.” The Birth of a Nation didn’t just transform cinema forever; it inaugurated a debate about art, race, and freedom of expression that shaped American history.

Lynskey then goes into a bit on the context of how The Birth of a Nation was written by Thomas Dixon and then adapted for the screen by D.W. Griffith.

Enter the NAACP, an organization created by liberal Jews for the benefit of blacks and with the deeper goal of reversing the cultural dominance of white Christians in America, doing what… well… what they are still doing today:

The local branch of the NAACP, however, had other ideas. Dixon’s previous work was so notorious that the civil rights group tried to have The Clansman (it was retitled shortly afterward) banned before having seen it. When the members arranged a screening on Jan. 29, their fears were confirmed. It was, they claimed, both “historically inaccurate and, with subtle genius, designed to palliate and excuse the lynchings and other deeds of violence committed against the Negro.” They sought to have it barred on the grounds of public safety. When their efforts failed, they urged the NAACP’s national headquarters in New York to take up the fight…

But in February 1915, just as Birth was making its way into theaters, filmmakers were dealt a serious blow by the Supreme Court. In Mutual Film Corp. v. Industrial Commission of Ohio, the court ruled that movies were not worthy of the same free-speech protections as the printed press. The ruling, which prevailed until 1952, gave the green light for states to create their own censorship bodies. In his majority opinion, Justice Joseph McKenna ruled that moving pictures were “capable of evil, having power for it, the greater because of their attractiveness and manner of exhibition.”

… and, presto!, the NAACP began actively promoting state censorship of a film:

The NAACP’s anti-Birth forces were spearheaded by its national secretary, May Childs Nerney. The association’s white-dominated leadership [i.e., Jewish leadership – Ed.] was divided, with some members worrying that the fight was a poor use of limited resources, but Nerney, who was also white, believed that opposition was essential. “If it goes unchallenged it will take years to overcome the harm it is doing,” she wrote in a memo. “The entire country will acquiesce in the Southern program of segregation, disenfranchisement and lynching.”…

[The NAACP] weren’t always candid about their embrace of censorship, however. An NAACP report stated that “All forms of censorship are dangerous to the free expression of art,” but noted that where bodies tasked with exercising censorship already existed, “it was our right and duty to see that this body acted with fairness and justice.” Yet the organization sometimes actively campaigned for new legislation, including the controversial Sullivan Bill, which one Boston paper claimed would “assassinate dramatic art in Massachusetts.” Where state boards didn’t exist or couldn’t be brought into existence, the NAACP used any weapon it could, from pre-emptive use of anti-riot ordinances to laws prohibiting art that was “subversive of public morality.”

Even as it faltered, the banning strategy put white liberals [i.e., Jews – Ed.] in an uncomfortable position. Some, including the celebrated social workers and NAACP co-founders Jane Addams and Lillian Wald, believed that the film was so unusually dangerous that censorship was justified; others refused to make exceptions and felt compelled to defend a film they found loathsome. A column in the Masses, a Greenwich Village radical magazine, agreed that the Birth of a Nation “perverts history, incites race-prejudice and justifies crime,” but deplored efforts to suppress it. “Our censors are getting ‘liberal.’ But there is one more stage of liberality. It is possible to say: ‘We will take the risk of this picture doing harm. We will take the risk of any picture doing harm. We will prohibit nothing.’ That is an honorable, if difficult, thing to say. Let the board of censorship say that, and resign.”

What does Lynskey think of the anti-censorship position taken by liberals of the Masses column stripe?

You have to wonder if the staff of the Masses would have been so willing to take that risk were they not all white. The harm Birth caused wasn’t measurable, exactly, but it was tangible. True, the worst fears of Nerney and Sinclair were not realized. The film didn’t provoke mass murder or race riots. And Dixon’s hopes that Birth would inspire a new wave of legislation against his bugbear, interracial marriage, were thwarted. But W.E.B. Du Bois, editor of NAACP journal the Crisis, later noted that the number of lynchings in America had risen sharply in 1915. In Lafayette, Indiana, a white man walked out of a screening of the movie and shot dead a 15-year-old black high school student.

Birth was also inextricably linked with the return of the Ku Klux Klan, relaunched by Alabama teacher William J. Simmons in 1915. The new Klan based its logo of a horseman with a burning cross on a still from the movie and made its first public appearance outside the Atlanta premiere. The film’s publicists cashed in by manufacturing Klan merchandise, including hats and aprons, and hiring hooded horsemen to promote screenings. Membership didn’t spike until the Klan launched a professional recruitment drive in 1921, after the film’s popularity had peaked, but Simmons claimed Birth had “helped the Klan tremendously.”

And, who knew, but they had ‘microaggressions’ and ‘triggering’ way back in 1916!

Regardless of its wider influence, the movie itself had a traumatizing effect on black viewers. The actor William Walker, who later played the Rev. Sykes in To Kill a Mockingbird, saw it in a segregated theater where audience members cried and cursed. Interviewed for the 1993 documentary D.W. Griffith: Father of Film, he recalled: “You had the worst feeling in the world. You just felt like you were not counted. You were out of existence.”

Our good friend, and anti-white activist, W.E.B Du Bois made an assertion and effort not altogether alien to liberal activists today, who actively seek to shut down – not debate with – sites such as American Renaissance, VDARE, Occidental Observer, and Counter-Currents:

For all these reasons, and despite some reservations, Du Bois felt that censorship was justified. Writing to the head of the NAACP in 1921, he called The Birth of a Nation “a special case. A new art was used, deliberately, to slander and vilify a race.” To Du Bois, it was “a public menace … not art, but vicious propaganda.”…

Du Bois concluded his memo: “We are aware now as then that it is dangerous to limit expression, and yet, without some limitations civilization could not endure.”