Some critic reactions to Sunday’s awesome final season premiere (an episode directed by Bryan Cranston himself):

The first of the final episodes of the series, which follows television’s favorite chemistry-teacher-turned-drug kingpin Walter White, aired Sunday, and it has received glowing reviews from TV critics. 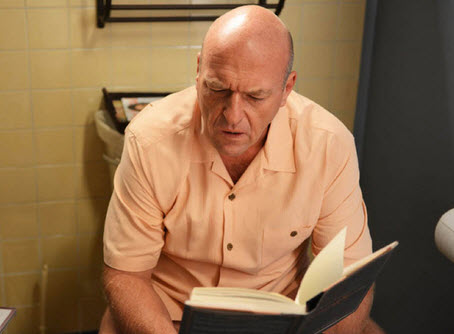 Goodman goes on to write: “All we know — and we need to be careful not to overthink it — is that we’re at the beginning of the end. And the first glimpse was just that. Magnificent, but just a glimpse. And next Sunday can’t come soon enough.”

Mary McNamara of The Los Angeles Times writes: “The narrative … moves back, to the moments just following the end of last season, when Hank (Dean Norris), Walter’s cop brother-in-law, finally realizes that the drug lord he seeks is sitting just outside at a picnic table, drinking a beer. Hank’s reaction to this sudden awful burst of knowledge fuels this first episode, reflecting more powerfully than any broken mirror ever could the terrifying chasm between perception and reality.”

Rousch adds: “Breaking Bad remains a powerful parable of irreparable moral rot, once again finding grim metaphorical resonance in Walt’s recurring cancer. No matter how you look at it, things appear to be breaking bad for TV’s most lethal anti-hero. Bad for him, good for us.”

The Washington Post’s Hank Stuever writes about Sunday night’s episode: “Of Breaking Bad’s many defining moments, it all seemed to be leading to this Sunday’s episode, when we get to see Hank’s reaction, as well as his next move. Even better? The moment Walt realizes the book [Walt Whitman‘s Leaves of Grass] is missing. It’s remarkable how far this one episode brings out the landing gear for the entire saga; it also indicates just how much needs to be accomplished to get us to the point of a couple of spooky flash-forward scenes that have hinted at the scope of the disasters to come.”

James Poniewozik of Time praises the cable drama for continuing its fast-paced narrative.

“If you were worried that the final run of Breaking Bad episodes would be lackadaisical in ramping up the drama and advancing the story as the finale approached: well, you can stop worrying. The return, ‘Blood Money,’ meant business,” he writes.

Sean T. Collins  of The Rolling Stone applauds the show for its ability to remain humorous in spite of its heavy-handed subject matter, writing, “Like most of the genuinely Great TV Dramas (as opposed to their relentlessly dour imitators), Breaking Bad remains a very funny show.”

He adds, “There’s a certain technique Breaking Bad employs for laughs that speaks to a larger virtue of the show – that ability to root us in the present moment and force us to constantly evaluate what’s gone before, based on new information.”

In his four-star review, The New York Post’s Michael Starr writes that the season opener “sets the stage for what promises to be a hyperactive, full-throttle ride over the next seven weeks.”

The internet was abuzz with speculative theories on how the show will end. (See this ‘Five Theories‘ article for example, or this article.) The best speculative theory I’ve come across is from this commenter:

The flash forward gave an amazing glimpse at the apocalyptic fate of the White family over the next nine months, but the finest moment was “Hello, Carol,” not only for the very BB-esque moment of levity, but for a glimpse of Walt’s (Lambert’s) state of mind in this day to come. We can only presume that Walt is a fugitive from the law, that his life has been torn asunder and he is gathering M-16 and ricin for whatever war he is about to wage. The fact that he would be so cavalier about his frightened neighbor seeing him suggests that whatever reckoning Walt is looking to bring down on someone is going to happen so soon that Carol’s inevitable call to the police doesn’t even faze him at this point. In other words, these are the final moments. 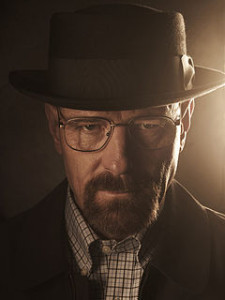 Hard not to think that the writers have seen the many references to the Ricin as “Chekhov’s Gun,” given that scene 1 features the return of the ricin, and Scene 2 is essentially a long pitch for a Trekkie episode that would probably be best titled “Chekov’s Guts.”

My speculation: Given that Jesse Plemons is now in the main credits, despite the fact he has done little more than Skinny Pete to earn this recognition, suggests that Todd is going to be pivotal in the final act. I think that Todd is the reason that the new meth being peddled to the Czechs is so impure, and as we know Todd is both reckless and unwise, I think Todd is apprehended, and decides to give up Heisenberg as his “get out of jail free card, bitch.”

When Walt learns that a former colleague has just turned on him, and the hammer is about to drop, he impulsively believes this must be Jesse, and so takes “full measures” to clean this up. Lydia, with Jesse removed and Walt doomed, must clean up the only remaining loose end who she now believes can identify her – Skyler (once again, despite the fact this is not true.)

In the end, this is a tragedy, and like all great tragedy, from Euripides to Shakespeare to Gilligan (and all lesser scribes in between), tragedy takes place in five acts, with the horrors of the fifth act often based on desperation and misunderstanding. That’s my guess, anyway.