Calexico: The Future of the U.S., Pt. II

SAN DIEGO (AP) –  The U.S. Justice Department issued a scathing review Wednesday of a small town’s police practices in a big drug and immigrant smuggling corridor on California’s border with Mexico, finding a lack of basic controls and oversight of criminal investigations, unstable leadership and other red flags.

The 133-page report was released less than a week after the ousted police chief of Calexico filed a federal whistleblower lawsuit describing missing guns, money and other evidence and allegations that city workers engaged in drug trafficking, overtime abuse and theft…

Hmm, I wonder what the ethnic composition of Calexico is?

(I previously posted on Calexico a year ago, in regards to an in-depth LAT story on the city’s corruption.)

Calexico, a city of 40,000 people 120 miles east of San Diego, is a big area of concern for federal agencies including the Drug Enforcement Administration and Customs and Border Protection, which routinely seizes heroin, methamphetamine and other drugs at two border crossings in the city. Easy freeway access to Los Angeles and Phoenix make it part of a coveted smuggling route, controlled by Mexico’s Sinaloa Cartel.

The area around the city has also been plagued in recent years by the discovery of cross-border drug tunnels. Earlier this year, two such tunnels were discovered in a three-week period – one of which ran the length of four football fields from a restaurant in Mexicali, Mexico, to a newly built house in Calexico.

Check out the extent of the police dept’s corruption:

The Calexico Police Department has been suspended from two task forces with federal or state officials that are designed to disrupt the flow of drugs — the Imperial Valley Drug Coalition and the Imperial County Narcotic Task Force. The Justice Department report says unstable leadership led to the removals.

The FBI raided Calexico police headquarters and seized files in October 2014, less than a month after Michael Bostic, a former top official with the Los Angeles Police Department, was hired as police chief and began cleaning house. The FBI has not reported results of its investigation.

Bostic, who was ousted in November by new city leadership, said in a whistleblower lawsuit filed last week in San Diego that he told the FBI of drug use, drug trafficking, money theft and smuggling by city employees.

The lawsuit says an audit performed by the Imperial County Sheriff’s Office at Bostic’s request revealed significant amounts of missing money, drugs, guns and personal property believed to be stolen by Calexico officers.

Gonzalo Gerardo, also a plaintiff in the lawsuit, reported suspicions of drug trafficking by Calexico police employees to the FBI in late 2013 when he was a lieutenant. 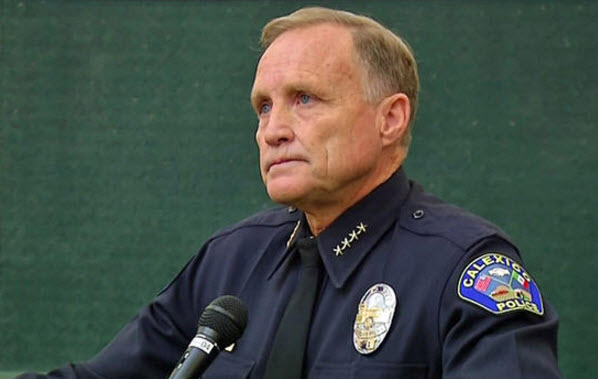 So Bostic, who must have been the only white guy working for the town, was unceremoniously dumped by the compadres.

It’s worth repeating some paragraphs from the 2015 LAT piece:

Guzman, like several other residents and city officials, chalked up the trouble in the Police Department–as well as the city government–to “the compadre system,” a set of unwritten but deeply ingrained rules that they say form the underpinnings for civic life in Calexico. Under the compadre system, they say, favors are traded like currency and personal relationships often trump the rule of law.

“The city has a long history of favoritism, cronyism and corruption among city officials,” Warne charged, noting he is the 26th city manager to be hired in the last 35 years. “The hiring of friends, relatives and mistresses has been a common practice–people who were clearly unqualified for their jobs. Goods and services are purchased based on personal connections without any consideration of quality…

The problems, Bostic said, stemmed from half a dozen or so officers, who also held sway in the police officers union. Bostic said they effectively ran the department,threatening other officers with misconduct investigations if they got out of line and running the department’s $450,000 annual budget for overtime to nearly $1.5 million.

Mexicans have very different ideas of what ‘government’ is and does, and what ‘la policia’ is and does.